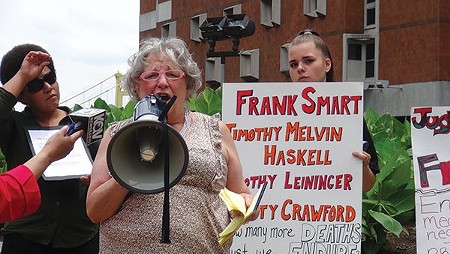 During Corizon’s two-year tenure there were 11 deaths, more than twice the national average in jails. The county took health-care operations in house staring in September 2015, with help from Allegheny Health Network and a $3 million increase in the jail's health-care budget.

But the Allegheny County Jail Health Justice Project, which launched in protest of the high death toll, is far from done advocating for inmates’ rights. Tonight, the group is relaunching its efforts to maintain accountability for the alleged mistreatment of inmates by county officers and health-care professionals.

Activist Julia Johnson, who heads the health-justice project, says that tonight's meeting will review the group’s accomplishments, update people on new goals, and recruit people for outreach efforts. Johnson says a new documentation project will gather stories of medical abuses within the jail from former and current inmates and their family members and friends.

“There have been significant leaps forward,” Johnson says regarding health care at the jail. “But we are still very critical that the county is not listening to citizens' requests. We feel they are still being ignored.”

The relaunch will also focus on continuing initiatives by the justice project. Johnson says the group is still calling for the firing of Allegheny County Jail warden Orlando Harper and for a large review of correctional officers' practices.

Johnson says that there some issues at the jail that have not been addressed, like the implementation of electronic medical records. According to the minutes of the December 2015 Jail Oversight Board meeting, an electronic medical-record system has not been implemented and "currently, everything is hand written on paper," even though an electronic system was supposed to be created back when Corizon was the health-care provider.

Johnson says that without an electronic system, records and medical information for inmates change hands too slowly and that such delays could have been a factor in the death of Frank Smart, who died in January 2015 after one day in custody, after not receiving his seizure medication.

“We need to put pressure from all sides to let the county know that this is important and people need to be held accountable,” she says.