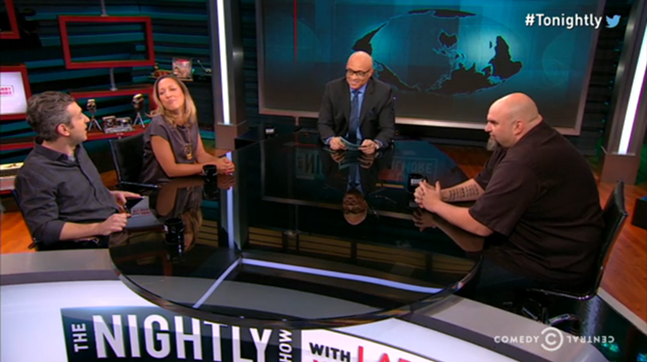 Sanders, the U.S. Senator from Vermont, is currently polling just four points behind front-runner former Secretary of State Hilary Clinton, according to an Investor's Business Daily/TIPP poll, and is growing his lead in New Hampshire.

"I think America is looking for authenticity, and I think that is what is driving these numbers," Fetterman said on the panel that featured Wilmore and two stand-up comics. "And [Sanders] is surging and surging in demographics that you wouldn't normally think a 70-year-old democratic socialist would be."

Another panelist thought Sander's proposal of free tuition at public colleges and universities was unobtainable, but Fetterman disagreed with this notio n and said some of Sanders' ideas are what Americans are looking for.

"I don't think Sanders is radical. I just think he is proposing common sense things that need to happen in America," said Fetterman.

City Paper caught up with Fetterman after his appearance on The Nightly Show, and he elaborated that his support for Sanders should not come as a surprise because the presidential candidate's ideas align with his. "There is a massive epidemic of inequality in this country, and that is what the campaign about," says Fetterman.

Earlier today, Fetterman guest DJ'd on WPTS-FM, the University of Pittsburgh's student station and combine that with his appearance on the Nightly Show, it appears Fetterman may be gaining popularity among millennials. Fetterman says these appearances were not part of some plan to target young people, however.

"I am getting invites from all over the place. I don't pick and choose," he says. "If somebody wants to hear about our campaign, I go."

But Fetterman does believe there should be a focus on the issues young people are facing. "[Their] student loan payments are starting to exceed mortgage payments. It is a big issue, and it is something that people should be paying attention too."

At a recent campaign event, another Democratic U.S. Senate candidate, Katie McGinty, also spoke about the issue of rising student loans. Although he has been politically active for years, Fetterman may be the political neophyte in this race. Besides McGinty, who served under both Govs. Ed Rendell and Tom Wolf, he also faces former U.S. Congressman and retired Navy Admiral Joe Sestak, who came close to beating incumbent U.S. Sen. Pat Toomey in 2010.