Was speaker at McGinty event a campaign staffer? | Blogh

On Jan. 7, Pennsylvania U.S. Senate candidate Katie McGinty held a campaign event at Pamela’s P&G Diner in the Strip District where elected officials, nonprofit leaders and regular citizens posed the issues important to them and McGinty responded to their concerns.

In our online coverage, we featured single mother and law clerk Nicole King from the South Hills who asked
click to enlarge 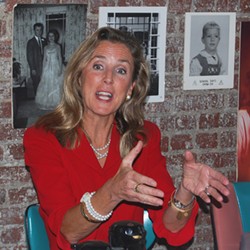 Photo by Ryan Deto
Katie McGinty during a recent campaign stop in Pittsburgh
McGinty how she would help her succeed given her large amount of student debt. She said her debt will be about $175,000

But it appears that King may have already had a relationship with McGinty. Steve Kelly, press secretary for U.S. Sen. Pat Toomey’s reelection campaign, called City Paper to point out that King may be a staffer for McGinty. McGinty along with with former Congressman and Navy admiral Joe Sestak and Braddock Mayor John Fetterman are vying for the right to face Toomey in November.

A search on LinkedIn showed that King had listed herself as a “Campaign Assistant” for McGinty’s campaign since Dec. 2015. (That information was later removed but still comes up in a search.)

When CP attended the campaign event at Pamela’s, neither King nor McGinty representatives identified King as associated with the campaign.

However, McGinty’s campaign communication director Sabrina Singh said that King is not a paid staffer and that King merely expressed interest in volunteering for the race.

“[McGinty] is proud to have [King’s] energetic support in this campaign,” says Singh. “The Toomey campaign should focus on the issues that matter to families across the state instead of attacking a hard-working, single-mother who wants change for Pennsylvania."

When asked why King’s LinkedIn page listed her as a campaign assistant, Singh said that King was a little “overzealous” in her enthusiasm to volunteer for the campaign.

By email Kelly responded: “Katie McGinty’s entire candidacy is phony, from her refusal to answer basic policy questions, to her use of campaign volunteers as props for press stories. Pennsylvanians won’t put up with that.”