Yesterday, Allegheny County Common Pleas Judge Joseph James struck down the city's paid-sick-leave ordinance. The law, which was passed almost unanimously in August, would have granted city employees one hour of sick time for every 35 hours worked.

"Our members fought to get this law passed," says Janice Brown, regional vice president of Action United, one of the organizations who advocated for paid sick leave. "We were glad that city council and the mayor passed it." 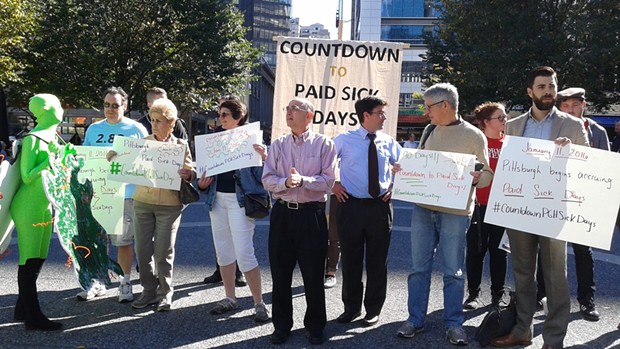 Photo by Ashley Murray
Organizers gathered in October to prepare for the city's paid-sick-leave law to go into effect.
However, almost immediately after the law was passed, the Pennsylvania Restaurant & Lodging Association, along with five local businesses, filed a lawsuit against it. The lawsuit alleged that the law exceeded the city's power.

"Obviously, the business owners, they wanted a little more in the bill and we understand that," says Pittsburgh City Councilor Corey O'Connor who sponsored the legislation. "I met with a lot of them that had objections. It's a give-and-take process. At the end of the day, we didn't meet their full criteria. If we went back to the drawing board, would it have changed the outcome today? Probably not."

O'Connor, and even the activists who championed for the ordinance, say they weren't surprised by the court challenge, but hoped the judge would rule in their favor. Similar court battles have been fought in cities like Seattle and Milwaukee.

"I think it's a bad decision. But honestly we weren't surprised by it," says Brown. "We hope the city appeals this decision because we think it's wrong."

"It's the right thing to do," says Bill Bartlett, director of Action United. "I think it's terrible that the restaurants are going to waste all of this time and money in court. Ultimately, we hope the city challenges this."

For now, O'Connor says Pittsburgh City Council and Mayor Bill Peduto will consult the city's law department to see what the options are.

"If this is a fight we're not going to win, we don't want to waste taxpayer money. We certainly believe in this cause, but at this point I don't know," says O'Connor. "On a positive note, the whole purpose of this bill was to fight for working families, and I think that was a clear message and one that we're going to continue to fight for as well."

According to Judge James' opinion, the paid-sick-leave ordinance violated Pennsylvania’s Home Rule Charter and Optional Plans Law by placing “affirmative duties on businesses, occupations and employers." To support his opinion, James referenced a 2009 Pennsylvania Supreme Court decision where another employment ordinance was defeated

"Obviously, we're disappointed. We thought the legislation we passed was a good piece of legislation," says  O'Connor. "Ultimately, at the end of the day, the outcome is a little positive, I think, because we now have a conversation about paid sick leave and before we didn't." 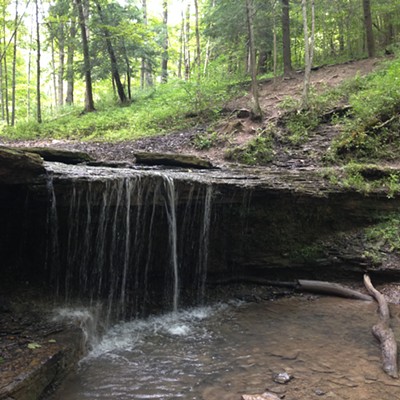 Recycle your holiday tree after the festivities are over