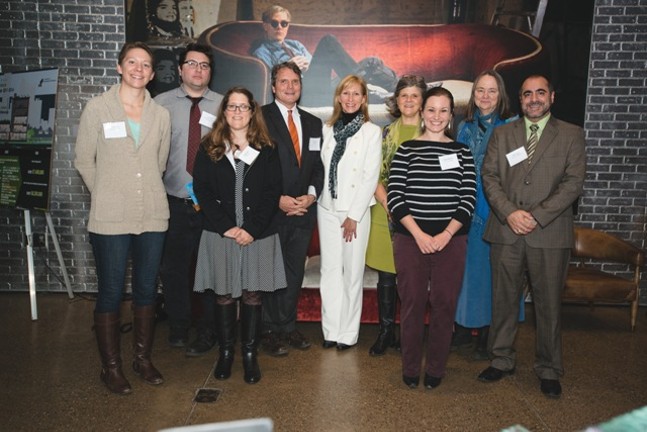 About 50 area employers participated in Sustainable Pittsburgh’s third “friendly competition” to see who could most reduce their use of energy and other resources over the past year.

Competitors – including businesses, nonprofits, universities and government entities ranging from tiny to huge – earned points for everything from switching to more energy-efficient lightbulbs to installing solar panels.

Winners were announced Dec. 2. Perhaps most impressive was the Top Legacy Performer award-winner — Conservation Consultants Inc. The South Side-based nonprofit is using 66 percent less energy than it did during the Challenge’s baseline year of 2010-11. (Even back then, this outfit, whose job is telling people how to save energy, was already using much less than the average for a building its size.)

Competitors also accumulated points for cutting water use, reducing landfilled waste and getting employees to use less environmentally harmful means of transportation.

Nonprofit winners included the Group Against Smog and Pollution (micro), GTECH (small) and Carnegie Museums of Pittsburgh (medium). The Carnegie also won the Top Energy Saver award by reducing energy usage in its facilities by 22 percent over the course of the year, and the Top Water Saver, with a reduction of 17 percent.

Pitt won the University category. And among municipalities, the winners Allegheny County (large) and Monaca Borough (small). Allegheny County was also the top waste reducer, cutting the waste it landfilled by a remakable 62 percent (via producing less waste to begin with, and recycling or composting more of what was left).

But here’s an editorial word of caution: The Green Workplace Challenge is swell, and to whatever extent it saves resources and increases awareness it’s all to the good. If everyone could be like CCI, and cut their already miserly energy use by two-thirds, we’d be in much better shape.

However, the Challenge is a voluntary program whose goal is engagement, rather than achieving a level of resource use that might actually make a particular business (let alone our society) anything close to environmentally sustainable.

Consider this figure from the Sustainable Pittsburgh press release on the Challenge: “[P]articipants saved over 2,865 metric tons of carbon dioxide equivalent, which translates to roughly 73 airline flights of 500 miles: roughly 2/3 of day worth of all flights leaving Pittsburgh International Airport on a typical day.”

That means that 50 local employers – including such massive entities as Pitt, Highmark and Allegheny County government – labored in earnest for an entire year and didn’t even offset one full day of flights at single medium-sized airport.

In the week after the much-discussed Paris climate talks, it makes you realize how far a society that practices fossil-fueled jet travel has to go to address environmental crises like climate change.

So while we celebrate these results, keep in mind that the Challenge is no substitute for what we really need: Systemic change (like, say, a federal carbon tax) that will move everybody (not just volunteers) as far as possible and as quickly as possible toward living within our environmental means.