Pittsburgh doesn't deserve Bennet Omalu. A decade ago, after trying to shed light on a brain disease that was contributing to the deaths of football players, he was run out of town. But, last night the Nigerian forensic pathologist  with nearly a dozen degrees and certifications in everything from music to business returned to the city  to launch a foundation named for him.

The Bennet Omalu Foundation will continue Omalu's work on chronic traumatic encephalopathy, a neurodegenerative disease he discovered after performing an autopsy on former Steelers legend Mike Webster in 2002. The foundation was founded by Giannina Scott, producer of Sony Pictures’ Concussion,  a soon-to-be-released film based on Omalu, and will be affiliated with the University of Pittsburgh where Omalu studied. 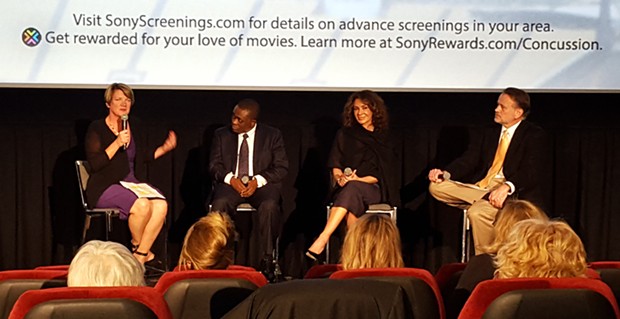 Photo By Rebecca Nuttall
From left: Jeanne Marie Laskas, Dr. Bennet Omalu, Giannina Scott and Dr. Clayton Wiley
"I was so inspired by this man, by his selflessness, his generosity," Scott said of her decision to make a movie about Omalu and create the foundation. "He gave up everything to bring this information to the world, and it didn't matter how much they tried to stop him, everything he lost, he continued his work."

The foundation launch preceded a screening of Concussion and after watching the movie, it's hard to reconcile Omalu's love of America and Pittsburgh after everything he went through. His discovery of CTE and its effects on numerous players in the National Football League was not originally celebrated, and his perseverance to spread the truth about the disease made him a target. His family and livelihood were threatened to the point where he ultimately decided to leave Pittsburgh.

And from Omalu's comments last night, you get the sense that he definitely does not hold a grudge. He sees his struggles as another step along the path to achieving the American dream.

"When I was a child growing up in Africa ... America was a country that was closest to what God wants us to be as his sons and daughters, a country where God sent his favorite people," said Omalu. "Today, with all of my experiences, my belief in this country as a child has been affirmed. I'm more American than America."

For our review of Concussion, pick up the Dec. 23 issue of the Pittsburgh City Paper.