The impending holiday season isn't bringing much good cheer or fellow-feeling to the campaign: The griping, fear-mongering and name-calling continues.

The next GOP debate is Tue., Dec. 15 (8:30 p.m. on CNN), and it marks the return of Chris Christie to the prime-time event. (Pataki, Graham, Santorum and Huckabee will put on a brave face on the early debate — 6 p.m., also on CNN.) The bromance between Trump and Cruz is over, and the two will be manning adjacent podiums tomorrow night. Look for insults, and the chance for personal-space invasion between these two.


This week, in Twitterville, we got a couple of petro-carbon gags:

Hillary tweeted out the new Mount Rushmore. I'm giddy imagining in what cabinet-level roles these funny ladies could fill ...
click to enlarge

After chain sawing the tax code earlier in the campaign, Paul put the instrument to its true use.
click to enlarge

Ted Cruz took a pair of insults in stride. He turned the other cheek on Cher with a passive-aggressive blessing, and met Trump's "maniac" accusation with a Flashdance clip (which doubles as an ass shot).

Can we trust a president who refers to himself in air quotes?

Can we afford a president that operates at this low-ball level of quid pro quo?

I feel this "report" is from an old cartoon: I see a giant box with a hand-cranked wheel and a sign taped on it that reads "Passport Machine."
click to enlarge 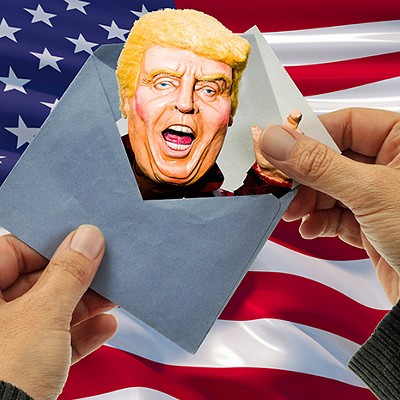