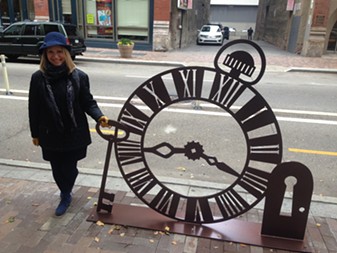 Photo courtesy of Ryan Deto
Myra Falisz posing with her public-art bike rack, "Time-traveling Mike."
A decade ago, there were no public bike racks in the city of Pittsburgh, according to Eric Boerer of BikePGH. In fact, Boerer says, it took two days of debate just to install twelve of the signature three rivers racks in the city.

Oh how far we have come.

“Even something as utilitarian as a bike rack, can function as public art,” says Cultural Trust President Kevin McMahon.

Boerer applauds the trust’s “creative approach” to a modern transportation issue and says the racks are a “perfect balance of form and function."

Wood Street Galleries curator Murray Horne says that four of the racks used stainless steel as their primary material and are maintenance free. The racks were funded thanks to $125,000 from the Colcom Foundation, an environmentally focused nonprofit.

This announcement comes on the heels of Allegheny County gutting the revenue of its public art law, which CP wrote about here.

Cultural Trust vice president Nick Gigante says he was glad to work with Colcom toward their goal of creating more beautification projects. He is also glad that the bike racks can be enjoyed and used every day of the year.

“Part of why we did this was to mark [the cultural district] as a preeminent entertainment and art destination,” says Gigante.

Myra Falisz created the bike rack titled “Time-Travelling Mike” said she was influenced from french author Jules Verne and the culture of the late 1800s. She adds that her art works perfectly as a bike rack because it was inspired by a time frame when bikes became a very popular mode of transportation.