If you were looking for rays of hope about the planet in Monday’s talk by the author of Field Notes from a Catastrophe and The Sixth Extinction, they were few and far between. 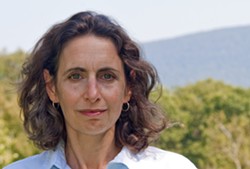 Photo courtesy of Nicholas Whitman
Elizabeth Kolbert
But I’ll point to one glimmer: Last time Kolbert visited Pittsburgh, in 2008, I interviewed her, and I recall the conversation taking place in a context of widespread climate denialism. After all, Al Gore’s Inconvenient Truth movie was only two years old, and lots of people didn’t really understand how climate change worked, or care to know.

This past Monday, the hopefulness resided in the fact that Kolbert assumed that what looked like a full house at Oakland's Carnegie Music Hall all agreed that climate change was real, and a real threat. She explained the science briefly, but didn’t seem to feel she had to address any possible deniers in the audience. That’s a start, I guess.

Trouble is, things would be a lot better today if we’d been at that point, say 25 years ago, when there was already overwhelming evidence that human activities were causing the planet’s climate to change in drastic and sometimes unpredictable ways.

Which brings us to the rest of Kolbert’s talk. She focused on The Sixth Extinction, her 2014 Pulitzer-winner that explores how human activity is likely driving a mass extinction of historical proportions among plant and animal species.

Climate change is just one reason, and on this front Kolbert offered little hope. Despite the stated intentions of everyone from the president down, global emissions of greenhouse gases keep rising.

Many scientists have said a safe concentration of atmospheric carbon dioxide is 350 parts per million. This year, we passed 400 ppm, a figure not seen on earth in literally hundreds of thousands of years. Some activists hold out hope that the upcoming global climate talks will result in agreements that bring emissions down. But Kolbert presented projections that even in a low-emission scenario, we’re likely to reach 550 ppm by 2100.

That’s a level sure to spell increased disaster in the form of rising seas and extreme weather, not to mention a level of ocean acidification (from ocean absorption of carbon) that would leave us with effectively dead oceans.

And that’s the optimistic scenario. Wish I could leave you with something happier, but that's the way it is sometimes.