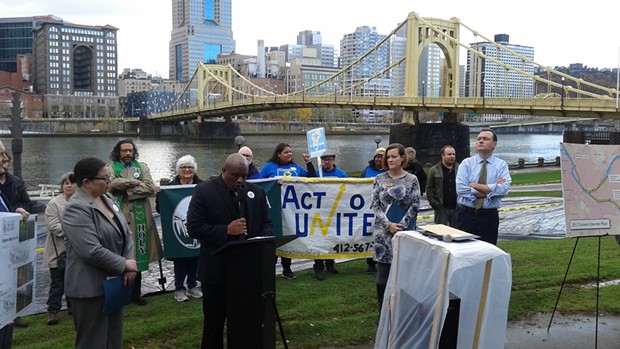 Photo by Ashley Murray
Rev. Rodney Lyde, of Homewood's Baptist Temple Church, speaking at a demonstration against ALCOSAN's planned construction along riverfronts
Standing in front of an 8,000-square-foot black tarp on the banks of the Allegheny River to signify a large work area, several organizations and a Pittsburgh city official said they couldn't stand behind ALCOSAN's proposed plan for river-front construction.

"We have come so far as a city and community in revitalizing our river fronts from places where people didn’t want to go to these cultural and recreational destinations," said Stephan Bontrager, spokesperson for Riverlife, an organization that guides the development of the city's river fronts. "So to undo that investment would be a tragedy, especially when there are such simple solutions that can be done with landscapes that enhance the investment we already have."

Several other organizations, including the Clean Rivers Campaign, Bike PGH, the Pittsburgh Community Reinvestment Group, Pittsburgh Parks Conservancy, and the City of Pittsburgh, spoke out against the proposed construction of 18 drop shafts. The shafts would allow access to the tunnel construction ALCOSAN has agreed to as part of a federal consent decree. The mandate is in place to bring the sewer infrastructure into compliance with the Clean Water Act. Right now, during heavy rain or after snow melts, stressed pipes overflow with stormwater and sewage into the region's waterways.

However, the groups say that extensive construction could hurt the economy, and that they want more investment in green
click to enlarge

Photo by Ashley Murray
Groups laid an 8,000-square-foot tarp on Allegheny Landing on the North Side to protest ALCOSAN's proposed construction along the region's river fronts.
infrastructure that would reduce the flow of storm water into sewer pipes.

According to a Riverlife economic impact study, in the last 15 years about $129 million has been invested in the city's river-front parks system, with a return on investment being nearly $4.1 billion in adjacent river-front development.

"Basically, these parks and trails were built, and everyone wanted to be next to them — new hotels, new office buildings, new restaurants, new residences," Bontrager said.

The group of speakers, including Mayor Bill Peduto's Chief of Staff Kevin Acklin, said they would like to see an "adaptive management approach," much like the one that elected officials just saw in Kansas City. That approach would include green infrastructure to keep storm run-off out of the sewer system and to beautify communities, as well as updating current gray infrastructure, like sewer pipes.

"What we’re really up against is a bureaucratic group of lawyers who have really been trying to get this done. They’ve been at it for a decade,"  Acklin told City Paper after the press conference. "We want to get it done, but we want to do it the right way. This is our city. We’re going to bear the risk of everything they’re planning for."

Acklin is referring to the decades-long back-and-forth negotiations between the federal and local governments on improving aging sewer infrastructure in order to comply with the federal Clean Water Act.

"All we’re asking for is what other cities have gotten ... a regionalized approach to invest in green infrastructure and existing infrastructure, because we think that’s not only ecologically sound, but that helps with economic development," Acklin said. "It helps us put those dollars, instead of just in the tunnels, but into our neighborhoods as well."

ALCOSAN says that it is negotiating with federal, state and county regulators for a plan that includes more green infrastructure and one that less expensive. Right now, the plan will cost billions. (Those costs are something that low-income ratepayers are concerned about.)

"Planning and design have not yet started and will not be completed for several years," Jeanne Clark, public information officer of ALCOSAN, wrote in an email. "They will also not necessarily be along the river. It may be possible to move some inland. ... We will work with the communities and the municipalities to make sure we create the least disruption during construction, and for green leave-behinds when we finish."

She wrote that those "green leave-behinds" could include a building, where a drop shaft would be housed, that would blend in with a trail or redevelopment, and that ALCOSAN has handled such a situation similarly along a bike trail in the South Side.

"Again, we will work with the community to decide what is the best green leave-behind. And we will avoid too much construction interference, taking measures like having workers park off site and shuttle them in so they don’t add to the footprint," she wrote.

Municipalities that feed into ALCOSAN's pipes and waste-water treatment system — currently 83 municipalities in Allegheny County do so — have been ordered to do a green-infrastructure pilot project for the next 18 months.

"We are committed to creating the best, most cost-effective plan to fix our water-quality issues," Clark wrote. "But ALCOSAN cannot do it alone. We currently own under 100 miles of pipe and the plant, where everything from all 83 communities winds up."