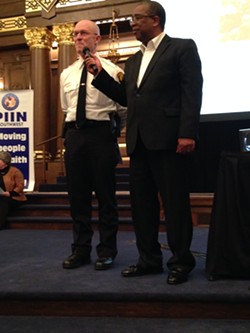 Photo courtesy of Ryan Deto
Pittsburgh Police Chief Cameron McLay
As a crowd of more than 1,000 sat watching in the Rodef Shalom temple in Oakland on the evening of Nov. 18, community leaders asked Pittsburgh Mayor Bill Peduto if he would stand with their fights for better equality in the workforce, education and in the city’s race relations.

“Yes, of course,” he answered to the cheers of the crowd at the Pennsylvania Interfaith Impact Network (PIIN) annual meeting. The interfaith coalition works to bring together faith organizations and activists to act on regional issues of justice and fairness. Peduto was then given three minutes to address the crowd and he spent those precious 180 seconds attempting to rattle off as many of his initiatives that address equality issues as he could.

Some of the initiatives included: increase in police officers, more transparency in public schools, formation of the affordable housing task force and $15 minimum wage for city workers. There were dozens more listed by the mayor, and by the time he finished he was out of breath.

Before the mayor’s three-minute lightning round, faith leaders gathered and spoke about the problems facing Pittsburgh and how to address them.

“We are demanding the elimination of structural racism and economic inequality in the city of Pittsburgh,” said PIIN president Rev. Richard Freeman.

The meeting was part of a fundraising effort, and Freeman told the crowd that PIIN needs lawyers, legislators and researchers to work with them. Above all, they need money, around $30,000, according to Freeman, to pay for it all.

Speakers during the event also asked Pittsburgh Chief Cameron McLay how his department is working to increase safety for Pittsburghers, particularly by addressing relations between the city's primary white officers and black residents..

“We have been creating a strong process in the training of dispersed ethical measures,” said McLay. “And we are learning how to teach our officers about unconscious bias and procedural justice.”

McLay also says the police department has been using all community events as recruitment opportunities in order to increase the department’s diversity and he has created a position within the department whose sole job is to ensure accountability among officers.

Community leaders also asked about when body cameras would be installed on city officers, and McLay said that the state legislation has been introduced and the department is ready for training if the legislation gets approved.

Asheville's Papadosio brings its Extras In A Movie Tour to Pittsburgh