Despite being on the cover of the City Paper for six days, Tiger, the Western PA Humane Society cat has not yet been adopted.

Tiger, a "cool cat", as described by Humane Society staff, is a 12-pound, two-year-old male and has a temperament that allows him to be around other pets. He is already neutered and has been at the shelter since Sept. 25. 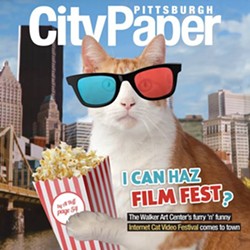 CP's cover was meant to promote a story on an internet cat video festival that was rolling through town. Using a shelter cat was meant to call attention to the number of animals available for adoption.

Staff here at City Paper are surprised as well.

"It was an honor working with a model as talented and charming as Tiger. He loved head scratches and purred in my arms between takes," said CP Art Director Lisa Cunningham. "I'm totally shocked someone hasn't adopted him yet and sad we can't adopt him as a City Paper office cat. Nothing beats an orange kitty. I should know. I have two!"

Adoptable pets can be seen on the Humane Society's website, which is updated several times a day. The fee for an adult cat (7 months or older) is $35 and includes spay or neuter surgery, vaccinations, feline leukemia test, flea treatment, worm examine, microchipping and a box cat carrier. Those wishing to adopt must be 21 years or older and present a valid PA state ID with current address (and, if renting, a copy of the lease that states that pets are allowed.)