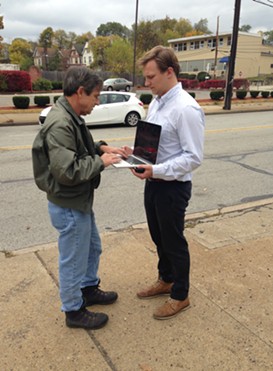 Photo by Ryan Deto
Joe Sestak and his intern set up a mobile desk strategy so Sestak can respond to emails on Fifth Ave. in Larimer.
Joe Sestak’s shoes have already walked more than 422 miles, what is three more?

On Oct. 30, the democratic US senate candidate attended two campaign events in Pittsburgh, and as part of his "walking in your shoes" campaign, walked three miles from the first event in Larimer to the second event at Carnegie Mellon University.

At the first event he spoke with about 15 veterans at Veteran Place on Washington Boulevard in Larimer about why he was running for a chance to take on Republican incumbent Pat Toomey and shared stories about his time in the Navy. He told curious vets about his plans to help address the homeless and incarcerated veteran problems and explained how his armed-forces experience could help grease some of the gridlock in Washington.

“My work in the armed forces symbolizes the benefit of working together, instead of the constant bickering currently in Washington D.C.,” Sestak said to the crowd of veterans.

After the veteran event, City Paper joined Sestak on his walk through the Larimer, Shadyside and Oakland, and there was no evidence of the Toomey-hired tracker that usually follows Sestak on his walks. CP previously reported an anecdote of how Sestak and a tracker helped a resident get a car out of snow ditch, then Sestak high-fived the tracker and shouted “bi-partisanship!”. After a few more friendly encounters with Sestak, the tracker has not been seen following the senate candidate and has apparently been replaced by the Toomey campaign, according to Sestak.

Steve Kelly, spokesperson for Toomey's campaign, says that the tracker left the campaign on his own volition.

Sestak says this behavior is emblematic of the problems exuded by Toomey and of how he does not relate to the average Pennsylvanian. “When was the last time you have seen Toomey call and hold a town hall meeting?” asks Sestak.

But Kelly says that Toomey has had 14 town hall meetings since last year.

Even with the addition of Democratic challengers Katie McGinty and Braddock’s-own John Fetterman, Sestak says he will not change his strategy and will focus on “trust and accountability.”

Sestak believes he can challenge Toomey in the 2016 race because of this lack of relatability and because of his record of promising one thing and then doing the opposite. For example, according to Sestak’s campaign website, Toomey says he supports bringing factory jobs back to America, but then voted to pass tax loopholes that contributed to companies exporting jobs.


As he walked past Chatham University on Fifth Avenue, Sestak spoke about the lack of attention small business gets from Washington bigwigs. While he was serving in Congress, he joined the Small Business Committee and was soon asked to be the vice chair. After accepting, he wondered why it was so easy to become vice chair so quickly, but says he realized it was because there were no Super PACs associated with the Small Business Committee.

An exclusive CP interview with Sestak can be viewed here.


Editor's note: This post has been updated to include the comments from Toomey's campaign.