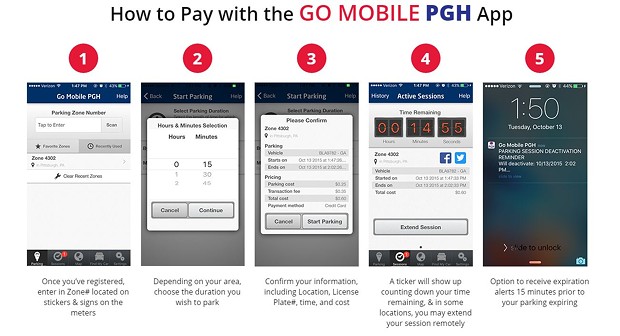 www.gomobilepittsburgh.com
The frustration of having to run to pay the meter is now over ... sort of. The City of Pittsburgh unveiled a new app that allows drivers to extend their meter times, and says that about 1,000 people used it within the first 24 hours after its launch.

“Today, the authority is going to build on their past successes, again through technology,” said David Onorato, executive director of the Pittsburgh Parking Authority, at a launch event in Market Square last week. “The mayor is very forward-thinking in always challenging the parking authority to think outside the box.”

The new app allows users to create a profile with their credit-card and license-plate numbers, so that they don't need to enter those again in the future. Users can also save their favorite parking-zone numbers — the number which determines the meter rate — and can opt for text-message reminders 15 minutes prior to when their parking meter expires.

Photo by Rebecca Nuttall
Pittsburgh Mayor Bill Peduto at the press conference to launch new Go Mobile PGH parking meter app
“So you’re sitting in a restaurant, you paid that meter and you’re having just a wonderful night and you don’t even think about it. But that meter ends, and you get out of that restaurant and there’s that parking ticket waiting for you,” Pittsburgh Mayor Bill Peduto said. “Those days are now gone.”

On-street parking is free after 6 p.m., and city-operated lots with meters charge until 10 p.m.

The app, a platform called Parkmobile that is used in cities across the country, including Harrisburg, Toledo and Asheville, charges eight cents per transaction. Pittsburgh's version accepts only VISA and MasterCard.

But there is another drawback, or advantage, depending on where you usually park: According to a parking authority spokesperson, the authority has removed time limits for meters in Downtown and parts of Oakland (the most expensive parking zones) to coincide with the introduction of the app. Therefore, app users can extend their parking via their smartphones for as long as they like.

In other parts of town, the app cannot override meter-time limits. For example, in Lawrenceville's business district, there are four-hour time limits (from 34th to 38th streets) and two-hour time limits (from 39th to around 50th street). In those cases, drivers are supposed to move their cars and begin a new meter session. An authority spokesperson said meter limits were established to generate customer turnover at local businesses.

A frequently-asked-questions page addresses time limits as well as other questions, including transaction fees and how parking enforcement officers will know if you paid.

If users do not have a smartphone, they can still pay remotely via an automated phone system.

The parking-authority spokesperson could not answer how many drivers signed up for the app over the weekend.

Drivers wanting to use the app can find more information here.