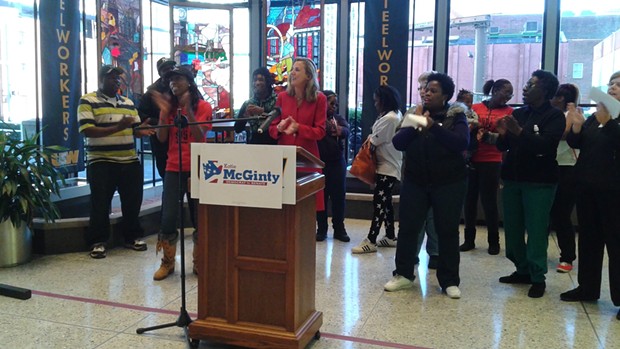 "We're here to stand with hard-working families," McGinty said, as a crowd of local Fight for $15 advocates stood around the podium beside her, "and to stand against the reality that we have today that people are working 40 hours a week in the this country and still living in poverty."

McGinty said that she is "joining more than 200 economists" in calling for the minimum wage to be raised to $15 an hour and to be phased in by 2020.

She invoked the arguments that the minimum has not been adjusted for inflation in several decades and that increasing the purchasing power of those in minimum-wage jobs would bolster the economy.

"When you put money in people's pockets that's how you grow the economy," McGinty said.

"I have a five-year-old son, and the fact that I work two back-to-back, I don't really get to see him," said Ashana Osborne who says she works at the Pittsburgh Zoo until 5 p.m. and then reports to her shift at McDonald's at 7 p.m. She said her pay at those respective jobs is $7.25 and $8.25. "I should be at home doing homework with him."

McGinty was the second Democrat to join the Senate race to see who would take on incumbent Republican Pat Toomey. She joined former Congressman Joe Sestak and Braddock Mayor John Fetterman later entered the race. McGinty is no stranger to local voters. She ran for governor in a crowded primary last year that saw Tom Wolf prevail and eventually beat Tom Corbett. McGinty served as Wolf's chief of staff before departing to begin her run for Senate. And if you wonder where McGinty stands on other social issues, check out our election guide from last May.