It was a week for nonagenarian headliners.

Given that the Pittsburgh Arts & Lectures Poets on Tour reading was free, the crowd of 150 felt no more than adequate in size, though it was plenty enthusiastic.

But Stern’s reading of old and new work was a delight, traversing his youth in “Jewtown” (now part of Uptown) and reflections on a long life. Stern’s work is at once highly accessible and wonderfully strange, always ready to turn, or land on, a mysterious image.

Stern, who was here in part to donate his papers to Pitt’s Hillman Library, is a fairly regular visitor. I’m sure that Holbrook has brought his long-running Twain show to Pittsburgh before also, though it’s been several years at least.

And when I say "long-running," that’s an understatement: The actor well known for his stage, TV and film work has been embodying Twain giving a freewheeling lecture since 1954. (Press materials claim it’s the longest-running show in American theatrical history, and I don’t know who could prove them wrong.)

Holbrook, who like Stern is 90, takes the stage as the latter-day Twain, wild white hair and cigar, and delivers, from memory, an edited hodgepodge of the author and wit’s writings. Some of the pieces are loosely connected thematically or otherwise, but the selection changes nightly; the show’s program lists some 100 pieces Holbrook chooses from among. 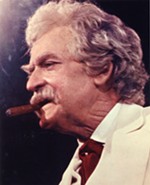 Photo courtesy of the Pittsburgh Cultural Trust
Hal Holbrook as Mark Twain
Knowing Holbrook’s age, I arrived at the Byham Theater last Thursday expecting perhaps a 90-minute show. Instead, we got close to three hours, including an intermission.

The canny Holbrook surely plays off such expectations. His Twain comes out firing off one-liners about his bad health habits, then veers into a bit in which he embodies an old man who can’t finish a story because everything in it reminds him of another story. The story goes on for 10 minutes, with “Twain” gradually slowing his delivery, eventually sitting down — and then appearing to either fall asleep, lose his train of thought or both.

I’m pretty sure most of the audience at this Pittsburgh Cultural Trust show shared my thought that perhaps we were seeing Holbrook have a series of senior moments or, bone-tired from the road, take an unplanned nap on stage.

But in fact, Holbrook – after rather gutsily letting the show basically come to a complete halt – delivers his punch line, rises from the chair, and continues the show with Twain’s previous gusto.

The material ranged wide, from a whole chapter of The Adventures of Huckleberry Finn (again, acted out from memory) to a series of humorous excoriations of Congress. (Apparently not much has changed in Washington since Twain tread the boards in 1905, the year the show is set.)

I think Holbrook also sent a couple in the row behind me packing by selecting some of Twain’s choice words about Christian hypocrisy. I believe the line, “If America is a Christian nation, so is hell,” was the one they exited on. All the more remarkable to think how some of Twain’s more scorching sentiments must have gone down 110 years ago – which, remarkably enough, is not even twice as long ago as Holbrook’s been doing this show.