The four museums celebrate their collective 120th birthday by going head-to-head in an online battle called “Clash of the Carnegies.”

The museum won't announce all the objects until Monday, but it has offered a sneak peak. Two of the natural-history museums offerings are Dippy the dinosaur and the 1867 diorama "Arab Courier Attacked by Lions." The CMOA has Teenie Harris' circa-1945 photo "Little Boy Boxer" and Van Gogh's "Wheat Fields after the Rain." The Science Center proffers its interactive robot Andy Roid and its Miniature Railroad & Village. And, the Warhol's putting up Warhol images "Cat" (from a 1954 book) and 1964's "Flowers."

There will be two rounds of voting, and the final four favorites — one from each museum — will then compete for “ultimate bragging rights.” 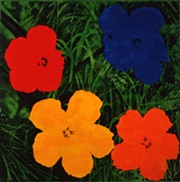 The Andy Warhol Museum, ©The Andy Warhol Foundation for the Visual Arts, Inc.
Andy Warhol's "Flowers" (1964)
The winning object will be announced during the 120th-birthday celebration at the museums of art and natural history on Nov. 14. One guest will also win a prize package including a free one-year membership to the four museums.

The Carnegie Museums of art and natural history were founded in 1895 by industrialist Andrew Carnegie, who in his later years was known for his philanthropy. (The Science Center dates to 1939 and the Warhol opened in 1994.) Each year, the museums reach more than 1.3 million people and bring more than 150 special exhibitions, films, theater shows and live performances to the region.