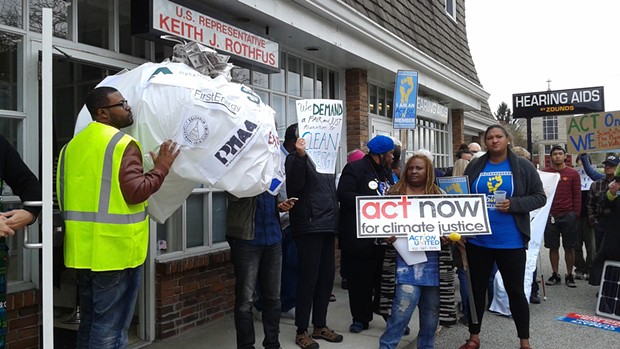 Photo by Ashley Murray
Pittsburgh Climate Movement protesters delivered a bag of "dirty" money to U.S. Rep. Keith Rothfus' local office.
Carrying a huge bag of dirty money above their heads and marching to the beat of a band and their own chants, more than 100 protesters arrived at Republican U.S. Rep. Keith Rothfus' local office to demand that he stop accepting "dirty money" and step up on climate-change issues ahead of the Paris talks.

“A year ago, half-a-million people took over New York City [for the People’s Climate March]. Today we’re showing that those people are everywhere," said Tom Hoffman of the Sierra Club, one of the more than 10 groups represented at the march. "There’s action in over 175 cities today [for national day of action] .The message is that the debate about climate change is over. Climate change is real, and we have to act now.”

Photo by Ashley Murray
Cameron Heydar, of Chatham University's Sustainable Impact Team, marched in the Oct. 14 Pittsburgh Climate Movement protest at Keith Rothfus' office.
The Pittsburgh marchers carried the bag of fake money — covered with the logos of energy and natural-resources companies  — into Rothfus' office, and formed a crowd outside.

"Those are all the companies that donate to Keith Rothfus. He’s doing their bidding," Hoffman said. “He has perfect opportunity. We need our elected leaders to do their part, and for the United States to lead.”

Speakers addressed their desire for clean jobs and concern for future generations' health.

"Because they know we need jobs in our community, they want us to believe that the only jobs are in fracking," Derek Fuller,
click to enlarge

Photo by Ashley Murray
Anita Weingarten, of Penn Hills, marched to U.S. Rep. Keith Rothfus' office carrying a sign of smokestacks, reading "Explain to our children it was good for the economy."
who attended the rally with Action United,  said to the crowd.

After leading the crowd in a chant, Erin Kramer of One Pittsburgh said “We are choking on their money, and it is not OK."  After the march, she told CP that her organization looks at climate change as an economic-justice issue.

"Our members, for example, and their children are often afflicted with asthma. So we can do things like pass paid sick days, but we need to address the root cause," she says. (Pittsburgh City Council passed paid-sick-day legislation in August, for which supporters often cited air quality and child-asthma issues as a reason parents may need  to miss work.) "We do see it as a false choice between a job that pollutes the planet and no job at all. We’re interested in the development of the next economy.”

Rep. Rothfus' office did not respond to phone calls for comment.