More than any other recent locally based recipient of a MacArthur Foundation “genius grant,” LaToya Ruby Frazier’s work is about bringing Pittsburgh to the world, and seeing the world reflected in Pittsburgh.

LaToya Ruby Frazier
More specifically, Frazier’s photographs and video document Braddock, her economically devastated hometown with its legacy of heavy industry; virtually all her work has been made there. But as with playwright August Wilson’s Hill District, Braddock is all Frazier needs to say her piece.

Frazier, it was announced Monday, is among this year’s group of 24 MacArthur Fellows. The distinguished group of original thinkers – each of whom receives a no-strings-attached $625,000 – includes: writer Ta-Nehisi Coates; artist Nicole Eisenman; poet and novelist Ben Lerner; poet Ellen Bryan Voigt; and playwright and composer Lin-Manuel Miranda (best known for the musicals In the Heights and Hamilton), as well as scientists, scholars and designers.

Reached yesterday by phone in Chicago, where she teaches at the School of the Art Institute of Chicago, said she was surprised by the award. (Most recipients are: The nomination process is done anonymously.) But her star has definitely been rising. Frazier, 33, has garnered national and international solo exhibitions by documenting her family, neighbors and Braddock’s very streets with the same unblinking candor. Her goal, she says, is to show how deindustrialization (and industry, for that matter), pollution and poor health care mark both neighborhoods and human bodies. (Her MacArthur page, including a short video, explains more.) Earlier this year, she gave a TED Talk titled “A Visual History of Inequality in Industrial America." Art by LaToya Ruby Frazier
"Momme (Floral Comforter)," from the Momme Portrait Series, 2008
Or, as her MacArthur page says, “Frazier’s stark portraits underscore the connection between self and physical space and make visible the consequences of neglect and abandonment … for Braddock’s historically marginalized working-class African American community.”

And here’s another video in which Frazier herself discusses her art.

Frazier began the work as a teenager, intimately documenting her mother, Grandma Ruby and herself – three generations of black women who witnessed everything from Braddock’s heyday as a booming mid-century steel town to its half-century of white flight, shuttered factories and the war on drugs. Many of the photos were collaborative: mother shooting daughter, for instance. Some of these photos were gathered into exhibits titled Notion of Family and published in a 2014 book of the same title. 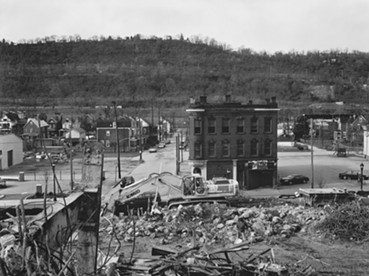 Art by LaToya Ruby Frazier
"Fifth Street Tavern and UPMC Braddock Hospital on Braddock Avenue," 2011
In recent years, she’s gotten attention for her series Campaign for Braddock Hospital (“Save Our Community Hospital”), about attempts to prevent UPMC from closing its hospital there. That series ironically incorporated images from Levi’s 2010 “Go Forth” advertising campaign, which was shot in Braddock, but which Frazier once blasted as “false propaganda and false representation.” The ads featured young hipsters settling an “urban frontier”; it was not the first time, as Frazier put it in her TED Talk, that “our existence has been co-opted, silenced and erased.”

In 2013, Frazier began a series of aerial images of Braddock that show how land is used there, again typically to the detriment of the poor. The high-rise where Frazier herself lived in her childhood was years ago razed, for instance, only to be replaced by an industrial facility; also see her "Bunn Family Home" image, below, which depicts a Braddock home surrounded by an industrial operation.

The owner of that home, fourth-generation Braddock resident Isaac Bunn, is a good friend of Frazier's. And while the media often offer what he calls "feel-good stories" about attempts to revitalize Braddock, Bunn says Frazier's artwork "revelas the truth. It shines a light and gives people like me a voice that people need to hear."

And here's a nice piece on a 2014 show of Frazier's, from the New York Times' Lens blog.

Frazier has also exhibited alongside veteran filmmaker Tony Buba, another Braddock native, who in the 1970s and ’80s began his own critically acclaimed career with a series of short documentary films about everyday life there.

"Her work is amazing," says Buba. Frazier's photographs "grab you," he says. "When you walk into a space and see her photos ... you don't have to go over to read the damn artist's statement. ... It's just so moving. That's what separates her from everyone else."

Buba says he actually predicted that there was a MacArthur in Frazier's future in 2014 — after she won a similarly prestigious Guggenheim Fellowship.

Her exhibition career has already seen its share of highlights, including the selection of Campaign for Braddock Hospital for the 2012 Whitney Biennial, and solo shows at the Brooklyn Museum and Boston’s Institute of Contemporary Art. (Locally, she's been exhibited at venues including the Mattress Factory and the Warhol.) Art by LaToya Ruby Frazier
"Bunn Family Home on Ninth Street" (2013)
And there’s more to come: Interviewed yesterday by CP, Frazier was preparing to depart for France for what she said was her first solo museum show, at the Carre D’Art, in Nimes.

Nimes is an industrial town with a working-class heritage that resonates with Frazier, whose grandfather was a crane operator at U.S. Steel’s Edgar Thomson Works, now Braddock’s (and the Pittsburgh metro area’s) last working primary-metals plant.

Though her art is internationally known, Frazier says that living and traveling outside the city where her subject matter resides has benefited her work.

“The distance has actually brought greater understanding,” she tells CP. In a globalized economy, she says, the problems of inequality and environmental injustice are also globalized. “I see Braddock in many places that I travel to.”

Frazier’s MacArthur Fellowship continues a run of such awards for Pittsburgh, with winners in recent years including poet Terrance Hayes, dancer and choreographer Kyle Abraham, and former University of Pittsburgh parasitologist and virologist Elodie Ghedin.

Moreover, at least two other 2015 winners have Pittsburgh connections: Lerner previously taught at Pitt, and while here published his poetry collection Mean Free Path. And Eisenman’s paintings and sculpture were a highlight of the 2013 Carnegie International.

Asked if she has any plans for her $625,000 fellowship, Frazier says only that she'll continue her work. “I just hope to make Pittsburgh proud,” she says.

On the Record with Bully's Alicia Bognanno

Riverfront bike/ped trail to reopen to the Strip District