Protesters hold vigil for inmates who died in jail, call for firing of warden | Blogh

Protesters hold vigil for inmates who died in jail, call for firing of warden 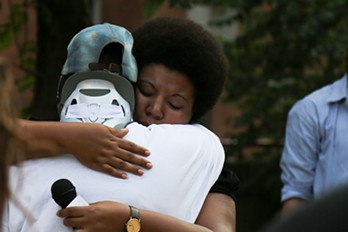 Photo by Theo Schwarz
Julia Johnson consoles Tomi Lynn Harris, whose son died in custody of the Allegheny County Jail in January.
There is no doubting that most people in Allegheny County are happy to see Corizon pack up and leave as health-care provider for the the county jail. Eleven people died during the private health-care company's two year tenure, even though inmates only spend an average of 58 days within the jail’s confines.

While most might think it a time to celebrate, the Allegheny County Jail Health Justice Project chose the day Corizon left, September 1, as a day to mourn.

“It is too little too late,” says activist Julia Johnson of the justice project. “We cannot bring back the lives of those lost at the county jail.”

The vigil was held in the plaza in front of the jail, where candles were lit in the hot afternoon sun and the names of all those who have died in the jail were read aloud.

Tomi Lynn Harris, whose son Frank Smart died in custody at ACJ in January, spoke to the crowd of 20, demanding fair treatment of inmates in the jail.

“We need people to care about people in the jail,” says Harris.

According to Harris, her son was only in jail custody for less than a day and alleges that he died because the staff refused to provide him with his seizure medication.

Before the vigil, the justice project held a press conference in the courtyard of the County Courthouse to remind officials that they are not content just because Corizon is no longer involved at the jail. As of yesterday, health care at the jail will be run under the county's direct supervision, with partnering efforts from Allegheny Health Network.

Johnson says that county officials continue to scapegoat Corizon and believes that officials should be held accountable for their actions involved in health care at the jail. She is calling for warden Orlando Harper to be fired and for a full investigation of the jail staff to determine who else contributed to the inadequate health standards.

Before the vigil, Johnson delivered a petition of more than 1,700 signatures to county officials calling for the firing of warden Harper.

Allegheny County Communications Director Amie Downs sent this statement to CP in response to the petition: “Warden Harper continues to have the full faith and confidence of the administration and will remain in place at the Allegheny County Jail.”