Earlier this year, the United States Justice Department announced that Pittsburgh would be among six cities taking part in a pilot program aimed at reducing racial bias and improving police-community relations. Many have applauded the new program and efforts by Pittsburgh Police Chief Cameron McLay to rebuild community trust in the police force.

But Pittsburgh is in many ways still dealing with the remnants of past unresolved police brutality incidents. 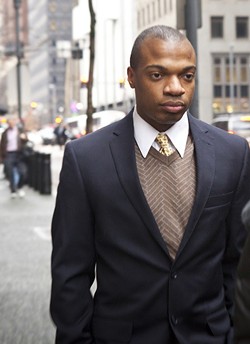 Photo By Heather Mull
Jordan Miles
The city was reminded of these Tuesday when attorneys for Jordan Miles filed an appeal on his behalf.

"If we can't get justice for Jordan Miles then all these conversations about police brutality are just that," says Brandi Fisher, president of the Alliance for Police Accountability, who has worked with Miles and his family over the past five years. "If we can't get justice then Pittsburgh being a pilot city for community police relations is a farce."

Plans for the appeal filed yesterday began almost immediately after the verdict was reached. The appeal challenges the split verdict on the basis that if the officers falsely arrested Miles, any force involved in that arrest must be deemed excessive.

"He was served a great injustice, and that never goes away. He never received justice. This should've never happened to him, and the people responsible need to be held responsible," says Fisher. "You can drive down the street and accidentally hit someone and kill them, and even though it's an accident, you're still held responsible."

The appeal is also based on the decision of the judge in the first trial to exclude evidence. After the verdict, Miles' attorney alleged that there was evidence to suggest that at least one of the officers in the incident held a serious racial animus.

"The officers are still working. Not one of them was reprimanded," says Fisher. "It's a classic case of police brutality. We are going to continue to advocate for Jordan Miles and his cause."