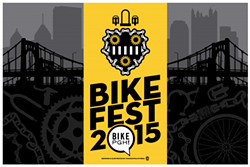 Highlights include the return of the 90 Neighborhood Ride, which visits each city ’hood, and new events like the Bike to the Bloomfield Saturday Market. A complete schedule is here.

BikeFest wraps on Aug. 30 with the long-running Pedal Pittsburgh, the region’s largest bike ride, with three routes of varying degrees of difficulty.

As to Friday’s Kickoff Party: While bikes and biking have a higher profile in Pittsburgh than ever — from new bike lanes to the new Healthy Ride Bikeshare, plus the predictable backlash to such phenomena — the BikePGH bash will recall the advocacy group’s own roots.

The first BikeFest party was held in 2005, when the current bike-friendly movement was a novelty. According to a press release, it was “a $5 all-night warehouse party at FreeRide." Subsequent years saw the addition of a silent auction, a VIP party, and venues including Pittsburgh Opera headquarters.

This year’s party, at up-and-coming party-central joint Spirit, is a stripped-back affair: No VIP party or silent auction — just music, dancing and $3 Penn Brewery beer. (OK, there are also Spirit drink specials and food for sale from Slice Island.)

The DJs are Selecta and SMI. The live bands include Wreck Loose, Lone Wolf and Grand Piano. Tickets are just $10 for members, and $15 for non-members. (Non-members can both become members and gain entry for $25.)