Eleanor Friedberger’s been taking it easy — at least easier than her wildly prolific run with The Fiery Furnaces, which produced nine albums in six years. After last year’s appearance at Exposed: Songs for Unseen Warhol Films, Friedberger prepped her third record, which she finished in May. It’s been two years since 2013’s great Personal Record, and Friedberger hints that its follow-up will be less “poppy” and was recorded in a way that calls back her Furnaces days. She comes to town this weekend with new music in tow for a First Friday at the Frick and encourages everyone to “just come and bring their dogs and kids and a bottle of wine — just hang out at the park.” Friedberger talked to CP about visiting Pittsburgh in the past year, scoring Warhol’s films and what lies ahead for her career 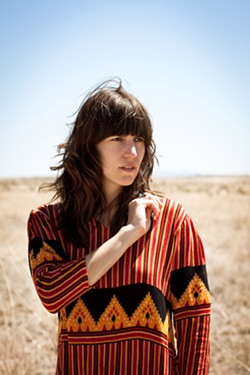 Eleanor Friedberger
I saw you posted a picture to Instagram at Jerry’s Records a few days back – what were you doing in town?
I’ve been visiting a lot – visiting a friend who’s working in Pittsburgh for the next few months, so I think I’ve already been three times this summer. I moved to upstate New York about a year and a half ago, so it’s about a six hour drive.

Did you have any good finds at Jerry’s this past visit?
I bought a couple – it’s embarrassing, just because they’re both really cheap, really common records – the Best of Buffalo Springfield, you know that one, with the yellow cover? And I bought a Grateful Dead one, Workingman’s Dead, because of all the latest Dead-craze. I know it’s cheap, but they’re good. I didn’t have too much time actually. Those kinds of places, even though so few exist anymore, they overwhelm me. So if I see one or two things I want, then that’s good enough.
I’d been to Pittsburgh a couple of times in the fall, working on the Warhol show. But before that I’d only been to Pittsburgh on tour one night at a time. I’m not saying [this] because I’m coming back to play a show, but I love it. I grew up in Chicago, and to me it has this combination of Midwest and East Coast feeling, and it’s just incredible, all these neighborhoods. It’s never-ending, there’s just so many different neighborhoods and each one more interesting than the next – everything looks so untouched. After all the traveling that I do around the country, there’s only a handful of cities that feel different from everywhere else, and Pittsburgh is definitely one of them.

What was the process for selecting and scoring the films for Exposed? Were they assigned to you, or did you have a choice?
It was a combination. Dean Wareham asked me to participate very early on. I remember meeting with him – or it was even an email – he just gave me a list of a few names, and Donovan was one of them, and I said I’d love to do a Donovan film, without having seen it. And I think I met with him in Los Angeles, and he showed a bunch to me, and I think the other two had already been assigned to me. But I’m not sure who did exactly.

Had you ever scored a film before this project, or was it totally new to you?
This was totally new to me. And the way I approached it was just kind of working off the other people involved, and I knew that aside from Dean, I thought the other guys would do the more experimental side of things — [and] they were more improvisational. I just wanted to write precise rock songs, because I thought that would make me stand out. One of the songs was something I had been working on, and it’s actually going to be on my next album, but I kind of changed it and made it work for the Edie film, and to me, it worked very well. And the Donovan song was — I was really interested in this Scottish poet that originally lived in New York and I thought that worked well for Donovan, and I wanted to incorporate some words into the song, because I thought it would be a good opportunity to do that. And then the Marisol song – I didn’t know anything about her, so I based the lyrics on one New York Times feature from 1966. So those were all mostly her words, pulled from a couple different articles about her.

So you did a fair amount of research to mesh these songs thematically with who the subjects were.
I did. Dean asked us to speak a little bit before we presented each film, and a couple of the guys didn’t want to do that – but Bradford and I did, and Dean obviously did. The first show was in Pittsburgh, and then we went to Los Angeles and did a few shows, and then New York – but by the end, that kind of became my favorite part of the show. Just getting to talk a little bit about each film. And I’m glad I ended up going with that approach to the music, too.

Do you think it was more challenging to match those themes with a different subject than the more personal subject matter of your solo work?
I don’t know, that’s just something I enjoy doing. I would like to do more stuff like that. I always try to make everything my own, and even the Marisol song, just coming directly from articles about her – the reason why I chose those was because I related to them myself. It’s about her trying to be a strong woman in the art world, and I identify with that. But it’s definitely something that I enjoy doing, and I’m happy to say that we’re going to do more of those shows in Europe next year.

I was once talking to a friend about artists with long, difficult careers with major shifts that are hardest to jump in to their discography and “catch up on,” so to speak. My first thought was David Bowie, but he said “the next career like that is going to be Eleanor Friedberger.” Do you see your solo work taking any more radical shifts, like we came to expect from The Fiery Furnaces, or is your solo output sort of a reprieve from that?
Hard to answer – I wish I could say I had a master plan, like “my fourth and fifth solo albums would sound like this and that.” I just finished an album, but unfortunately I don’t know what the release date is, so I can’t give you the scoop, but I finished it in May. And it sounds a little bit more like The Fiery Furnaces than my last two albums – just in terms of sounds on the album, the way it was recorded. It’s less poppy. When I went back and listened to my first two solo records, they came from a dance music background – the drums are really loud, and the vocals are really loud. This doesn’t sound like that – it sounds a lot more authentically ‘70s. It was recorded on tape, and it sounds more like a full band – it’s recorded with the guys who I’ll be playing with in Pittsburgh. To me, it felt like one of the first band records I’d ever done to be honest. I’d like to somehow compare myself to David Bowie (laughs) … I’m not sure how to go about doing that. I mean, I would like to say, “my next record’s going to be techno or reggae record,” but I don’t know if that’s true.

In an interview before Personal Record, you said something about wishing you’d started your career 10 years earlier. How do you think you would have used those extra 10 years, if you’d gotten started around 17 or 18?
I’m trying to remember why I said that exactly – I think it had a lot to do with back when the music industry was in a different place. That’s a big part of it. I’d like to say I’d be a better guitar player … I’d be playing guitar solos by now. I think I would just be a better songwriter by now. With each year, I’m improving, and discovering more of who I am – whatever that means. But I think that’s true, and that all comes with time. And I think that if I started when I was younger, maybe I would have been even less self-conscious … I think about the first five years or something that I was performing onstage, and I didn’t know what I was doing. I wish I had gotten that over with sooner.

You were swept up and thrust into the indie spotlight so quickly.
We were really, really active for about three years – just making records and touring. 2003, 2004, 2005, 2006, I guess. But I think it has slowed down a lot lately. I wish that I was as good as I am now back then, for sure.
What you said about David Bowie – someone who has that kind of longevity, they’re just so lucky and so rare. But I don’t think artists can exist like that anymore – unless something changes dramatically in the industry. I don’t think anyone’s capable of that type of longevity, aside from a handful of people.

You mean as far as having a career that goes for 30 years or more?
In terms of popularity, you know?

I was actually at the Dormont Swimming Pool on Sunday. Have you ever been there?

No, I don’t know anything about it.
It was built in the ‘20s – it’s like a lake, just this giant swimming pool in the Dormont neighborhood. I have a friend who lives in Dormont – she took me there. It’s the kind of place that it just doesn’t exist – you can bring in like rafts, people are smoking, and there are speakers up high on these posts with rock music playing. It was just the radio, and I remember floating around the pool – “Let’s Dance” came on. I just felt like I was completely transported. Nobody batted an eye – it was like “everyone knows this song.”