Billy Porter in “Kinky Boots” at the Benedum | Blogh

Billy Porter in “Kinky Boots” at the Benedum 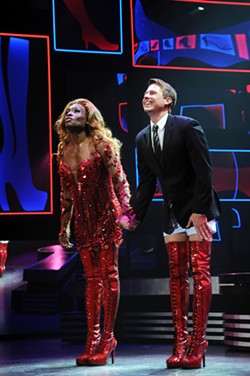 Porter, in the role he originated in 2013 and that won him a Tony, plays Lola, a drag queen who comes to the unlikely rescue of a failing shoe factory in a small British town. This touring production, hosted by Pittsburgh CLO, was the Homewood/East Liberty native and Carnegie Mellon grad’s first stage role in Pittsburgh in a decade, most of that falling during extended periods when he was unable to follow his 1990s success on Broadway with any further roles there.

So while Porter visits Pittsburgh a fair amount, for charity events and such, this show marks a red-letter (and red-leather) homecoming for sure.

Last night, at least, Kinky Boots’ Act II showstopper was “Hold Me in Your Heart,” a powerful, gospel-style number that Lola sings as a solo in full ball drag. The scene is set at a nursing home where Lola is performing; after the Benedum audience’s massive ovation, Porter paused to wipe away tears. Lola followed with this bit of dialogue addressing us as if we were the play’s nursing-home audience. “Believe it or not,” Lola says, “I grew up just a few miles from here.”

That brought down the house, too.

Add that to the list of reasons Porter feels so close to Lola, whom he’s played almost nonstop on Broadway since the show opened in April 2013. There aren’t, to put it mildly, a ton of gay, black, male roles on Broadway, but Porter, 45, has made the most of this one. His knockout voice, acting chops, dancing and all-around charisma are more than a match for Lola’s parade of fabulous costumes. (Porter is still starring in the Broadway production; his appearance with the touring production was by special arrangement with the CLO.)

I sensed even more of Porter’s own recent story in the Kinky Boots narrative arc that has performer Lola turning shoe-designer. “Me, a designer?” she says, when offered the gig. In his recent interview with CP, Porter spoke about how his difficulty getting work beginning in the late ’90s led him to start writing – a real-life case of career transition from performer to creator. (Porter’s first full-length play, While I Yet Live, premiered off-Broadway last year.)

Those are a few of the reasons why, at the Benedum last night, the show itself at times felt almost secondary to Porter’s story.

As to the show itself, well, for dramatic heft, Tony Kushner or Suzan-Lori Parks Kinky Boots ain’t. Nor is it trying to be. It’s a crowd-pleaser on the thematic order of The Full Monty and Billy Elliot — perhaps, not coincidentally, two other musicals that began life as movies.

Kinky Boots’ explicit, and frequently underlined, message is about accepting people for who they are – though honestly, in a post-RuPaul world, it’s hard to imagine that the musical-theater audience has to work too hard to embrace drag queens as heroes. (As even Lola says at one point, “Drag is mainstream.”)

What elevates Kinky Boots, aside from some snappy one-liners by librettist Harvey Fierstein, are the fun
and sometimes moving songs by Cyndi Lauper. Though often wonderfully melodic, it's more pop (ranging from disco to rock) than it is traditional Broadway, but it works just fine. And the choreography is terrific, with sequences like the Act I-ending conveyor-belt dancing to the R&B burner “Everybody Say Yeah.”

The hard-working cast brings it all home. Drag-queen characters and musicals are a perfect fit; Kinky Boots makes you wonder why they’re not matched more often. This is a show that rarely passes up a chance to go for a laugh and, thanks largely to Porter, it seldom fails to get one it goes for.

Kinky Boots continues at the Benedum through Sunday, with seven more performances scheduled. The run is sold out.