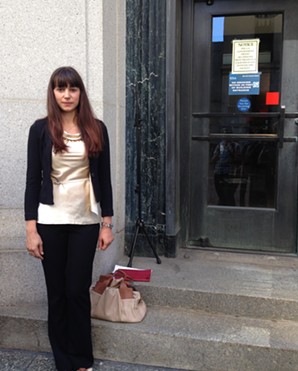 Photo by Ryan Deto
Donora resident Viktoryia Maroz is part of an effort to bring a lawsuit against a Monessen plant owned by ArcelorMittal USA.
Viktoryia Maroz, of Donora, a small town on the banks of the Monongahela River in Washington County, awoke at 1:30 a.m. last Saturday to a powerful stench — a smell she describes as a mix of rotten eggs and burning rubber. The culprit, she says, are fumes emanating from a coal-processing plant in neighboring Monessen.

“Even if I have the windows and doors closed, I still smell it,” says Maroz. "It is worse starting at 5 p.m. and on the weekends."

Maroz has filed dozens of complaints with the plant’s owner, ArcelorMittal USA, the state Department of Environmental Protection (DEP) and the federal Environmental Protection Agency since the plant reopened in April 2014. Maroz says she has not noticed any improvement since filing her complaints, even though tests near her home have shown that contaminants, such as arsenic, have been found in the air.

“”I felt so lost, I felt like I had done it all, but there wasn’t anything being done to resolve the situation,” says Maroz.

Now, she has joined forces with other community members and the citizen-based nonprofit PennEnvironment to take the steps to form a lawsuit against AcelorMittal USA. The Chicago-based steel company is owned by the multinational Luxembourg-based AcelorMittal S.A. and is the world’s largest producer of steel.

As part of a press conference in front of the U.S. Federal Courthouse on Grant Street, PennEnvironment Executive Director David Masur announced today that the “citizen suit” allows for private individuals and organizations to sue violators in federal court, after providing 60 days notice of their intent. The notice was filed yesterday.

“I’ve met with residents who live in towns all around the this plant, Donora, Monongahela, etc.,” says Masur. “Their stories about air pollution from this facility are gut-wrenching.”

PennEnvironment has compiled a list of about 80 citizen complaints to the DEP since the plant re-opened in 2014. According to a November 2014 Pittsburgh Tribune-Review article, the DEP cited the plant six times for illegal emissions over an eight-month period in 2014.

Masur adds that the plant has violated the Clean Air Act hundreds of times since it restarted.

“It is outrageous that the world’s largest steel company cannot comply with our clean-air laws,” says Masur.

The National Environmental Law Center (NELC) is partnering with PennEnvironment to assist in legal action against the steel giant. Josh Kratka, attorney for NELC, says the suit is not seeking individual damages, and they are merely “trying to get [AcelorMittal] to comply with the law.”

Kratka adds that the plant’s key air-pollution control system has been offline for a while, but the company is continuing to process coal anyway. Kratka says this is a direct violation of the Clean Air Act.

Masur hopes that a full-blown lawsuit does not have to be filed. He is confident that the 60-day waiting period will produce some sit-down meetings with the AcelorMittal, and solutions will be sought.

However, if negotiations fail, PennEnvironment is ready to force litigation to ensure the steel producer’s compliance. Masur adds that they could possibly seek on-going “mandatory minimum penalties” to be enforced when the company falls out of compliance.

Further, Masur thinks those penalties should help to fund the DEP, so that the state agency can keep a better watch on companies that are breaking the rules.

“Thousands of companies in Pennsylvania are not violating anything,” says Masur. “The DEP should not let loose the ones who are breaking the law. They should not let them slide by.”

“ArcelorMittal just learned of this potential lawsuit from PennEnvironment today. ArcelorMittal takes our environmental performance seriously. We are disappointed by the performance record of the Monessen coke plant since the facility’s May 2014 restart as we have been challenged by issues such as opacity exceedances at the No. 1 battery combustion stack. We have been working closely with regulatory authorities to address the cause of those exceedances as well as other concerns. In June 2015, we expedited a desulfurization system outage to improve the performance of the operation. In mid-July, the Pennsylvania Department of Environmental Protection performed an inspection and conducted visible emissions readings of the No.1 battery combustion stack, which demonstrated compliance with the opacity standards.

"We are committed to ensuring that the recent improvements prevent future occurrences and maintain compliance levels. We know that being a trusted and responsible user of our natural resources is the price of admission in today’s metals and mining business, and we are committed to achieving and maintaining full compliance with all environmental permits at all of our locations.”