Things got ugly, personal and just straight-up loopy this week between the candidates. Over the weekend, Trump dismissed John McCain's "hero" status, causing an immediate flurry of "Shut up McCain IS a hero!" tweets from the other GOPers.

Tuesday saw a rush calling for lowered flags to honor the servicemen killed in Tennessee; it was a bonus for those who govern states and flagpoles — and Trump, who got in early with this tweet:

Oh, and Ohio Gov. John Kasich jumped in on Tuesday, becoming the 16th GOP contender. But only Ted Cruz noticed.

Because the media was going bonkers with Trump giving out Lindsey Graham's cell-phone number on live TV. Which finally roused Graham out of his pity party griping about being likely left out of the Aug. 6 debate, and found him tweeting out an epic video in which a potential President of the United States grinds up a phone in a blender.

Graham was inspired perhaps by Rand Paul, who earlier had issued a video challenge asking supporters which pointless, extra-legal method they preferred for amending the tax code. (Update: The chainsaw is winning the vote.) 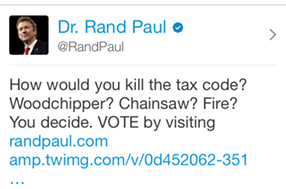 Things are mellow enough over the Hillaryland that staffers had time to design summer-themed cozies, including the cringe-inducing "More like Chillary Clinton, amirite?"

And Straight Outta WTF, Marco Rubio is looking to lock down the GOP gangsta-rap vote in Iowa and New Hampshire.

George Pataki risked nothing but ridicule on this "DUH" wager.

And sad clown Santorum promoted the other guy.
click to enlarge