A conversation with Tom Gimbel of Foreigner | Blogh

A conversation with Tom Gimbel of Foreigner

With nine Top 10 hits, including “I Want to Know What Love Is” and “Cold as Ice,” there are few bands as omnipresent as Foreigner. Members have come and gone over the years, but multi-instrumentalist Tom Gimbel — who plays guitar, saxophone, flute and keyboards— is one of the group’s longest-standing members, having joined in 1992. Before that, he toured with Aerosmith (look for him next time Wayne’s World 2 is on TV). Gimbel spoke with CP over the phone in advance of Foreigner’s appearance at the First Niagara Pavilion, this Sunday. 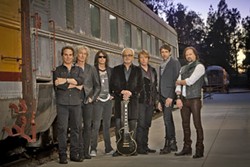 
Are you at home right now?
Yeah, I’m here at the desk, I opened up my laptop, I feel like a real professional. [laughs]

As a multi-instrumentalist, what is your favorite to play?
I would have to say singing. It’s the most expressive, you can tell a story, there’s just no other instrument that you can really paint a scenario like that. But I try to play the sax like I’m singing. At one point when I was trying to get better, I used to play the sax and imagine a word in my head behind every note. So, it would come out like sentences. In any instrument, you have to be careful not to speak in paragraphs. You’ve got to stop and take a breath and let the ideas come across.

All the other ones are really tied. I could go on and on about why I love each instrument, starting with the drums, which was my first when I was a kid. So many musicians start out on the drums. I remember Steven Tyler and I would both take turns on the drum kit. [Former Foreigner singer] Lou Gramm, I think, was originally a drummer … the list goes on and on.

When I think about Foreigner, it’s kind of mind-blowing how ubiquitous the hits are. What is that like, as a member of the band? You probably hear the songs wherever you go.
It’s neat. They've become part of the sonic landscape. “Cold as Ice” is part of the nomenclature. Someone might say to someone “You’re as cold as ice,” or [sings] “Hot blooded!” It’s really cool to see that kind of recognition. And it goes around the world. We’ve done shows in almost every imaginable country, from China to Russia, through South America, and we’ve had great, great, great shows. And people sing along, especially in South America, they sing very loudly. And it turns into this giant choir. Its indescribably delicious to be a part of. It’s really a thrill to know that the music is so widespread.

What is it about Foreigner that people connect with?
No one knows the magic behind a hit song. We’ve asked Mick Jones, the main songwriter and founder of Foreigner, about songwriting and how he wrote so many great songs, and he say he doesn’t really know. He gets the process started, and then it goes, and then he sort of wakes up and it’s finished, and the words are on the pad and the music’s on the tape. So I think there’s a lot of indescribable stuff there. I would call it magic. And whatever it is, he’s not telling us how he did it.

But as a listener and a participant, I think a lot of it has to do with the openness of the songs. First of all, it’s incredible music, the chorus, the rhythm, the melody … all that is obviously world class, top notch. But the lyrics themselves are very honest and direct. There’s nothing esoteric, he’s not talking about the planets — well, he is on “Starrider” — but in general, the lyrics are conversational. And I think that kind of stuff stands up really well over time. Those [are the] kinds of lyrics everyone can relate to.

I would think that no matter how good the songs are, you’d be somewhat sick of them after all these years.
No … I feel so incredibly fortunate that these songs have never aged for me when I do play them every night. I look forward to playing them every night. I’m incredibly blessed and fortunate. This music has not worn on me one bit. And a lot of that is because there’s some complexity woven into the simplicity. The chord structures keep me satisfied

Is there anything the band consciously does to keep things fresh?
Mostly things like … throwing pretzels at the drummer while he’s taking his solo. We love doing that. The poor guy, Chris Frazier, is out there playing his heart out — he’s an incredible drummer, he used to be with Whitesnake and Eddie Money and Steve Vai — and he’s a real showman and he’s up there doing an incredible drum solo and all of a sudden just bowls of pretzels are falling on his head and he’s catching them with his mouth. Little stuff like this [laughs].

And we enjoy all the fun stuff like yogurt and berries and quinoa. Regular rock n roll stuff.

Photo courtesy of Emily Jones
Tom Gimbel
What’s it like spending so much time on the road?
We've toured more in the past 5 or 6 years than then we used to in the first 14. There’s more of an emphasis on live performance now, because there’s no way to duplicate it and put it on a hard drive and give it to your friends [laughs]. The concert is where the rubber meets the road. It’s been great to be a part of that, its like an upward momentum. We’re playing more shows, we’re making more friends, seeing more people that we know at these shows.

Do you have a favorite Foreigner Song?
I think it’s probably “Urgent,” not just because of the saxophone, I really love the song itself. It makes everyone move, it makes your foot tap, makes your hips kind of sway a little bit. It’s just a great dance song.

Council to consider solutions to vacant properties and blight