There’s a famous Mozart quote in which he calls the organ “the king of instruments.” The French composer Hector Berlioz went a little deeper with it, referring to the organ and orchestra as “pope and emperor,” respectively. Less majestically, Bach said of playing the instrument, “There’s nothing to it.”

For a longer, more verifiable quote, ask Nathan Laube. He’s the assistant professor of organ at Eastman School of Music in Rochester, N.Y., and an elite organist who spends time between classes performing all over the world.

“In this instrument you have this incredible crossroads of so many different crafts, of instrument building, of acoustic, of architecture, of sound, of the repertoire of music history,” says Laube, 26. “When people ‘get the organ’, so to speak, they’re hooked for life.”

This Sunday, Pittsburgh will host the American Guild of Organists Mid-Atlantic Regional Convention, a four-day celebration of the instrument with performances, panels and workshops, spread across Pittsburgh’s wealth of churches. The event isn’t strictly religious, as with the organ it’s more or less impossible to separate the instrument from its religious origins. But the agenda is pretty robust, ranging from classes on “handbell techniques” to a live scoring of Charlie Chaplin’s The Immigrant, to a trip on the Gateway Clipper.

Pittsburgh, whether you know it or not, is a good place to be an organist, says Larry Allen, the convention committee chair and organist at Mt. Lebanon United Lutheran Church. AGO’s National Convention is held every other year, so in the off-years, cities apply for the opportunity to host its regional counterpart. After winning the bid for 2015, Allen and the Pittsburgh AGO committee have spent the past two and half years planning this week’s convention.

”If you look at AGO chapters around the country, I think Pittsburgh would come up in the top group very easily,” says Allen. Besides the city’s abundance of churches, (”Let’s face it, most organs are in churches, so that’s where you have to go,” says Allen), Pittsburgh is home to the Organ Artists Series, a program founded by AGO’s Pittsburgh chapter that has been bringing international stars of the craft to the city to perform for over 30 years.

But the real star of Pittsburgh’s organ scene is, fittingly, an organ. St. Paul’s Cathedral in Oakland is home to one of the most unique organs in North America, built by the
click to enlarge 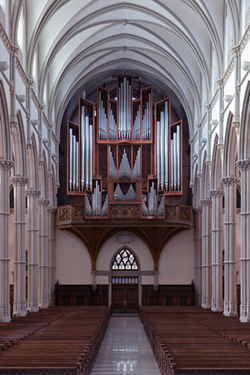 “It has tracker action, which means that the keys which the organist plays directly control the opening and closing of the pipes and therefore the speech of the pipe can be altered by the type of touch the organist plays,” Allen wrote in an email. “The organ and the acoustic at St. Paul are one of the finest combinations in Pittsburgh.”

That’s the draw that makes the von Beckerath, and by extension, organs so special. It’s all about the marriage of the instrument and the space, how the two interact. While they are not “permanent” in the strict sense — they can be removed or replaced — organs are generally built for the spaces they’re in. The venue is part of the instrument.

”What we have that’s so unique at St. Paul’s is an instrument that has a crystalline clarity and very poetic individual instrumental stops within the instrument,” says Laube, who will perform on the organ Monday. “It’s framed by such a beautiful architectural and acoustic context and that brings yet another dimension to the experience of listening to that music.”

With that kind of versatility, Laube is planning a program that plays to the organ’s many strengths, including pieces from modern American, late Gothic, Baroque, Renaissance, and German Romantic music.

The theme for the 2015 AGO Mid-Atlantic Regional Convention is “Bridges to the Future” and Laube, at 26, represents something of a generational ambassador for the music. Considering its religious context and dependence on physical space (which doesn’t really translate to YouTube), bridging the gap to younger generations is a tall order, says Laube. But he’s not deterred.

“It isn’t going anywhere,” says Laube. “As long as we have people who will play it well, who will take care of them and people who will respect what they mean to our musical society.”

Kicking off the convention is David Briggs, who’ll perform a live, improvised score to Charlie Chaplin’s silent film The Immigrant on Sunday night. That event, as well as Chanticleer’s close-out performance on Wednesday, will be open to the public. The rest of the events require registration, which is closed. A full program for the convention can be found here.

A conversation with Stephan Jenkins of Third Eye Blind