The Pittsburgh Post-Gazette is getting pounded on social media this morning for a backward-thinking, close-minded, inappropriately breezy Op-Ed piece on Caitlyn Jenner by conservative-blowhard-columnist Jack Kelly.

Wait, it wasn’t Jack Kelly? That makes it even more alarming. Well that, and the fact that the paper was just honored earlier this year as a nominee for a media award from GLAAD (the Gay & Lesbian Alliance Against Defamation) for a series called, "An Identity to Call Their Own," which featured the personal stories of six transgender individuals. 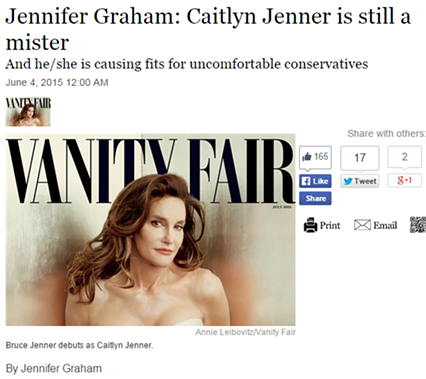 A screen capture of the Post-Gazette's Caitlyn Jenner Op-Ed.

The editorial, written by Jennifer Graham, a P-G associate editor since January (according to her LinkedIn profile) appears under the headline, “Jennifer Graham: Caitlyn Jenner is still a mister.” The piece starts out talking about how Jenner’s transformation from Olympic athlete Bruce to female celebrity, trans-activist and Vanity Fair cover model Caitlyn, will force Republicans — of which Jenner is a member — to address the issue of gender identity.

Needless to say, that’s not the way it went. The piece constantly referred to Jenner with masculine pronouns (he, him, his), and because the paper insists on using needless courtesy titles in its copy, it referred to her as Mr. Jenner.

… [F]or many Americans, who view gender dysphoria as a psychiatric disorder, not a laudable lifestyle choice. To them, the Annie Leibovitz depiction of a beguiling Caitlyn in a corset, legs coyly crossed, arms tucked behind her as if bound, is a Photoshopped finger in the face. Worse, they — unlike Mr. Jenner — are forbidden authenticity of response. Faced with the omnipresent image of a person who is female from the waist up, male from the belly button down, they are ridiculed as bigots if they suggest, in the quietest of voices, that such a person would have headlined the tragic freak shows in carnivals of old. Doctors who examined Julia Pastrana, the sadly celebrated “bearded lady” who died in 1860, declared her “one of the most extraordinary beings of the present day” and “a distinct species.” One could say the same of today’s act, the lovely and talented Brucette. Mr. Jenner, however, is both architect and engineer of his design, Bruce 2.0, unlike the pitiable woman who died five days after delivering a hirsute baby boy who died at birth."

In case you didn’t catch it, yes, Graham used references to the “good ol' days” of carnival freak shows to refer to Ms. Jenner, or as Graham so sensitively calls her: “Brucette.” Brucette?!? Really? Why not just call her “fruity,” “fairy,” “queer” or “fag?” I’ll tell you why. Because you know those words are hateful, disgusting and inappropriate. So you try and be cute and clever with "Brucette." Guess what? It’s just as disgusting, maybe more so.

And, for the record, Ms. Graham, I don’t think anyone should be ridiculed for making a mistake of gender. But we’re not talking about a mistake. We’re talking about you advocating the rest of the world willfully ignoring someone’s personal identity because referring to Caitlyn Jenner as a woman bothers you in some way. Here’s a news flash: It’s not about you. And perhaps you would be best served by taking a look at our own Em DeMarco’s excellent comics journalism piece about how to make sure you're using the correct gender pronouns.

I just can't bring myself to understand why people continue to think it's their place to have an opinion over someone else's body and identity. Yes, Caitlyn Jenner is a public figure and you have a right to pay attention to her or not. But her identity and her body are none of your fucking business, and that's a concept that people can't seem to bring themselves to understand.

Our staff writer Alex Zimmerman just talked to Michael Silverman, executive director of the New York-based Transgender Legal Defense and Education Fund, who says of all the responses to Jenner: "I haven't seen anything like this."

"The editorial was ignorant, disrespectful, mean-spirited and offensive," Silverman says. "This kind of commentary contributes to putting transgender people in harm's way. All this editorial does is criticize her in a mean-spirited and largely juvenile way. The vast majority of opinions have been extraordinarily favorable. This piece is in the minority."

“It’s still “mister,” despite the fiction presented by Vanity Fair and its breathless cheerleaders, because until below-the-belt surgery is done, Mr. Jenner is still male, albeit a male with great hair and breast implants. The truth, obscured by the noisy hosannas, is that the image is no more — or less — a lie than any other magazine cover. It comes, however, with a sinister bonus: the suggestion that anyone who is sexually conflicted can, and should, be awarded a radical rearrangement of their privates (even at taxpayer expense) and be awarded all the rights and privileges of their desired gender, to include bathroom privileges, without anyone protesting that the bearded lady has no clothes. It’s issues like these, not a wild-eyed bent for injustice, that makes conservatives wince as Mr. Jenner joins Chaz Bono and Laverne Cox in the don’t-call-them-freaks parade.

… Finally, for everyone who, despite their best efforts at compassion and acceptance, just can’t bring themselves to say “her” or “world’s greatest athlete Caitlyn Jenner,” I give you Mr. Jenner’s mother, Esther, who, while “very happy for him — or her,” still trips over the pronouns and maintains something resembling a bright moral line: “I still have to call him Bruce. His father and I named him that,” she said. At least that solves the pronoun problem. When in Rome, do as the mothers do.”

Well, that makes perfect sense. Because throughout history parents have always been understanding of the gender conflicts and sexual identities of their children. There’s never been a 15-year-old tossed out on the streets by parents because they were transgender, bisexual or homosexual.

This piece represents the worst kind of thinking on this subject. Also, it seems to come completely out of left field for the one daily newspaper in town that isn’t the Pittsburgh Tribune-Review. It’s really sad and disheartening. And I’m not the only one enraged by this. You must read this great response from journalist and transgender woman Parker Molloy in which she writes:

“What value has your hateful screed added to the world? And this isn’t just about Caitlyn Jenner. This is about all the transgender people (particularly transgender women of color) who are murdered, lose their jobs, are denied health care, etc. because of who they are (and it’s not a 'lifestyle choice.' I assure you that I would be dead had I not come to terms with myself.)”

Also, it goes without saying that the Twittersphere is beyond pissed, and I do not believe this will be the last time that the P-G hears about this. Nor should it be.