Blink and you might have missed the campaign to organize service and technical employees at Allegheny General Hospital. But yesterday 80 percent of these workers voted to join Service Employees International Union (SEIU) Healthcare Pennsylvania.

At a press conference today, AGH employees, a North Side pastor and state Rep. Jake Wheatley gathered at Community House Presbyterian Church, across from AGH, to talk about the decision to unionize.

"There was never a question in my mind to form a union at Allegheny General Hospital," said Aleisha Starkey, an AGH unit secretary. "I believe in making our hospital the best it can be."

About 1200 AGH nurses joined the union in 1999 and efforts to unionize service and technical employees, which include respiratory therapists, radiology and lab technicians, nursing assistants, environmental and food service workers, and secretaries, began in the spring.

"I share my co-workers excitement in this moment in which so many other AGH workers who have a hand in running the hospital have formed a union," said Jake Yaglowski, a registered nurse. "They have made history as the largest group of hospital service and technical workers to organize in Pittsburgh."

Of the approximately 1200 employees, 83 percent of service workers and 72 percent of technical workers voted in favor of joining the union. Terms of a new contract will now be negotiated between AGH and the workers.

"As long as these [health] systems grow bigger, we believe hospital workers need a strong voice for ourselves and for our patients," said Darlene Nicholson, who has been involved in the union effort for two weeks. "Choosing to have a union strengthens our commitment to our hospitals and our dedication to our patients and our communities. With our vote, we have a voice in an industry that has become the main economic driver in the region."

The organizing process hasn't gone as smoothly for UPMC employees who have been working to join SEIU since 2012. Unlike AGH employees, UPMC workers have yet to hold a vote, but officials with the campaign say that's because UPMC has prevented them from having a fair organizing process.

According to a release from SEIU:

The vote comes as workers at UPMC are also forming a union and calling on their employer to respect their rights and work with them to improve jobs. Last year, a federal Administrative Law Judge found that UPMC had engaged in widespread and egregious violations of workers’ rights at UPMC Presbyterian and Shadyside hospitals and ordered the employer to reinstate four workers, pay them lost wages for the period they were out of work, remove all unlawful disciplinary actions from workers’ records and inform all service workers at the hospital of the systematic and egregious violations of workers' rights. 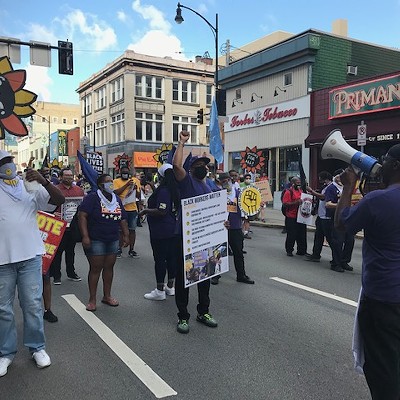