A local artist whose “Robot Repair Shop” was a favorite pop-up attraction Downtown, as well as a nonprofit trying to supply “clay cases” to area schools, are seeking your support. 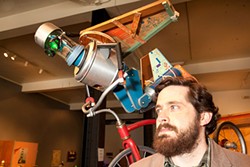 Photo by Heather Mull
Toby Atticus Fraley at his SPACE gallery show last year
Bridgeville-based Toby Atticus Fraley is best known for Fraley’s Robot Repair, a whimsical art installation that for 18 months occupied the storefront that’s now the restaurant, Butcher in the Rye. Fraley uses repurposed materials from old appliances to shoe-trees to craft “robots," most of which don’t actually move at all, and which look like what people 50 years ago imagined robots would look.

Fraley says he has a chance to reboot his installation at Pittsburgh International Airport, and that the airport even has some temporarily vacant space to house it. But he needs $10,000 to actually make the art, which would be “entirely new” rather than a reprise of the Downtown incarnation and three times as large. Construction would start in July for a late-summer opening

Here’s a CP feature on Fraley on the occasion of his 2014 solo show at SPACE gallery.

You have until June 17 to contribute to Fraley’s Kickstarter campaign. Also see this website.

A clay case is a small kit stocked with basic ceramics gear including a work mat with instructions, ceramics tools, clay and glazes. The Union Project would fire finished artworks in its own kilns. The group calls the cases “studios to go.”

Funds raised via Indiegogo will be used to purchase all the materials, assemble the cases, underwrite programming costs for schools, and pay for the ceramic teaching artists.

All this for $5,000, which is the Union Project’s goal. If the goal is exceeded, the program will be expanded to teach more than 200 children. The deadline is next Friday, May 29.

Review: Palma Violets at Brillobox, May 21