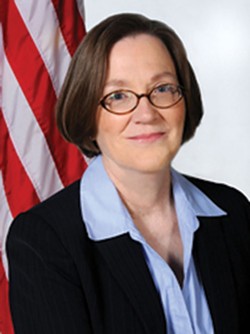 Allegheny County Council
Barbara Daly Danko
Daly Danko, who died last week after a 10-year battle with cancer, was previously endorsed by both groups. And because her death occurred so close to the election, her name will remain on the ballot.

“Voters are asking us three questions,” Sam Hens-Greco, Chair of the 14th Ward Democratic Committee said in a statement released this morning. “Can I still vote for Barbara? Should I still vote for her? And what happens if Barbara is elected?”
From the release:

According to the Allegheny County Democratic Committee By-Laws, should Ms. Daly Danko win the primary, members of the Allegheny County Democratic Committee who reside in County Council District 11 will meet after the primary to select a replacement candidate for the general election. Ms. Daly Danko anticipated this situation shortly before her death and, in a letter to her constituents, wrote:

I wrote a column that appeared in print and online yesterday also urging voters in that district to vote for Daly Danko, an independent Democrat who spent her years on council fighting for her beliefs and those of her constituents, even when she found herself in the minority of councilors. Her most famous battle was over a plan to drill for natural gas under Deer Lakes Park. I apparently was not alone in my sentiment to elect Daly Danko as a tribute to her years of service.

“We endorsed Barbara because she was a great civil servant and an independent voice on County Council.” said Kathie Smith, President of the 14th Ward Club in a statement. “We are urging voters to vote for Barbara and those principles of independence and integrity that were so fundamental to her.”

Eagle species unveiled at the National Aviary in Pittsburgh