The performance festival's venture to the North Side, in just its second year, was a success, says founder and organizer Daniel Stiker.

Jimmy Grzelak in a promo shot for "St. Jimmy Celebrates 'The Food At Our Feet'"
If that increase sounds modest, it’s still a 12 percent jump – not bad for a tightly budgeted venture spotlighting underground artists, working with volunteer staff and setting up shop in half a dozen, often makeshift venues in a whole new neighborhood.

Stiker adds that another 150 or so participated in free Fringe events this past weekend, including street-theater organized by City of Play.

The move from last year’s neighborhood, Shadyside, went well, Stiker says. “The North Side was great to us, and the community showed that they are excited to have us as their neighbor,” he writes in an email. “I think the North Side will end up being our home, as long as we can get the proper funding.”

The festival remains uncurated — all two dozen acts who applied got in — which led to widely divergent theatrical experiences in venues that included the Neu Kirche, Max's Allegheny Tavern and the New Bohemian.

Of the three shows I attended, the highlight was St. Jimmy Celebrates “The Food at Our Feet.” Performing in a borrowed space in restaurant Bistro to Go, fringe-circuit favorite Jimmy Grzelak impressed with this hour-long solo show, which was half performance art structured like a religious service, half more conventional monologue.

The first half wittily cast celebrity chefs — Sandra Lee, Ina Garten, Paula Deen — as religious figures. It’s hard to describe, but it mingled high irony, Grzelak’s capable tenor singing voice and falsetto (in songs including “What If God Was One of Us”), some very clever sound design, and him eating a whole cup of Heinz ketchup with a spoon. The show’s title was taken from a 2011 New Yorker article about famed foraging Danish chef René Redzipi, whom Grzelak claimed, in the monologue, to have met and spiritually bonded with on his travels.

After the show, Grzelak told me it was his first performance in Pittsburgh. Let's hope for more.

Another rewarding production was Songs from a Lost Civilization & Other Stories, a mix of puppet shows, poetry readings and audience interaction from locally based lead instigators Cheryl Capezzuti and Kellee Van Aken. Most of the show was was cute, clever, heartfelt or all three, but the highlight here was the short, closing title work.

The poignant vignette was set in a wardrobe, and the puppets were constructed from “forgotten” (or “lost”) vintage objects — spool of thread for a head, folded postcard for a jaunty yellow vest — that recalled the dead. The scene was performed to a breathtaking, prerecorded song by Van Aken (lyrics) and Douglas Levine (music), with divine singing by Joe Domencic, Zanna Fredland and Christina McCann. Look for this one, too, should it pass your way again. 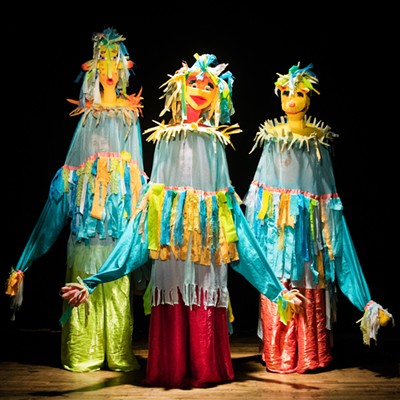 An autistic magician, One Man Apocalypse Now, Hillary Clinton meets Eva Peron, and much more at the Pittsburgh Fringe Festival