August Strindberg is considered one of the progenitors of contemporary theater, and you can get a strong taste of his work in the Pittsburgh premiere of a new translation of this play. 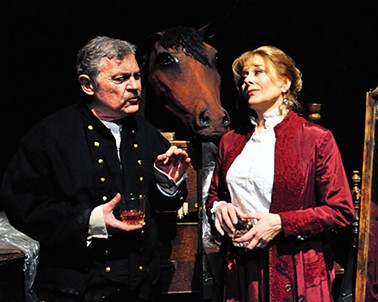 Photo courtesy of Kinetic Theatre Co.
Sam Tsoutsouvas and Helena Ruoti in "Dance of Death"
Kinetic's Andrew Paul explained in this CP preview piece why he thinks Dance of Death is important if seldom produced. But in the adapted translation by Irish playwright Conor McPherson, the dark comedy feels like it could have been written yesterday (or at least by Edward Albee) rather than in 1905.

The show's three actors, Helena Ruoti, Sam Tsoutsouvas and Mark D. Staley, make the words sing — and cut — at the specially outfitted New Hazlett, where most of the usual seating is shrouded and the audience sits in chairs on the stage itself.

The show has three more performances tonight through Sunday.

The New Hazlett is located at 6 Allegheny Square East on the North Side.