Participants in a challenge to reduce energy and water use are on track to meet their ambitious goals, says the Green Building Alliance. Perhaps more importantly, voluntary participation in the scheme by occupants of Pittsburgh’s two busiest business districts is expanding. 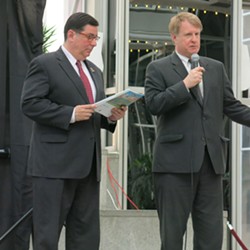 Photo by Bill O'Driscoll
Mayor Bill Peduto and County Executive Rich Fitzgerald at yesterday's 2030 District event
That was the message at yesterday’s Pittsburgh 2030 District Progress Report announcement. Pittsburgh is one of 10 North American cities with such a district. Participating property owners — including some of the city’s largest — have pledged to cut usage of both energy and water by 50 percent by the year 2030.

The GBA launched its district in 2012, with initial participation from property owners Downtown (including North Side stadium-and-parking district). Late last year, the district expanded to include Oakland.

On the path to 2030, the target for the end of 2015 is to reduce both energy and water use by 10 percent from baseline numbers. The report covered through 2014, by which time participants had cut total energy use by 6.3 percent, 2030 District Director Anna Siefken told a crowd of 200 yesterday at Downtown’s PPG Place Wintergarden. The water-use target, by contrast, met its 10 percent reduction goal a year early.

The bigger news, though, might have been how many more property-owners have joined the challenge: There are now 85, more than double the number in 2013, and the count of affected properties has quadrupled, to 436, representing about 65 million square feet of real estate.

The District’s “Property Partners” now include property-owners ranging from the governments of Allegheny County and the City of Pittsburgh to corporations (Alcoa, Highmark, BNY Mellon, PNC, UPMC and more), real-estate companies, universities, churches, small businesses, and institutions like the Carnegie Museums.

The District convenes meetings of participants and provides tools to help them figure out how to use less water and energy. Attendees at yesterday’s announcement included both County Executive Rich Fitzgerald and Pittsburgh Mayor Bill Peduto, who took the stage together to discuss how participating city- and county-owned buildings have fared. “This is something that we’re both very, very passionate about,” said Fitzgerald.

The rise gives Pittsburgh both the highest number of commited buildings and the most square footage of any of the 10 North American cities with 2030 Districts, Siefken said. And that affords the District more opportunities to save resources and improve indoor conditions for the people who live in, work in or otherwise utilize those buildings.

The GBA calculated the total energy saved by participants at 503 million kBTUs, or enough to power 5,562 homes. About 53 million gallons of water were conserved, or enough for 262 homes (or 1.3 million loads of laundry).

Certain individual buildings did much better than average: The massive, century-old City-County Building, for instance, cut its energy use by 47 percent against the baseline. The David L. Lawrence Convention Center, touted as a green building from its inception, cut energy use by 27 percent. Other structures didn't so do well: The county’s STD Clinic, in Oakland, actually used 46 percent more energy than when it joined the District. Though Fitzgerald acknowledge such “backsliding,” nobody at yesterday’s event explained why it happened.

Looking ahead, while it took participating property-owners two-and-a-half years to cut energy use 6.3 percent, Siefken says that the goal of 10 percent by this year’s end is in reach. “We’re feeling confident we’re going to make it,” she told City Paper.

One reason for that confidence is all the new participants. In fact, many Downtown participants have actually already met their energy-reduction goals for 2020. But while Siefken noted that Oakland’s preponderance of university and hospital buildings presents a set of challenges distinct from Downtown (half of which is office space), she said the newcomers have plenty of low-hanging fruit to pick.

Meanwhile, Siefken said, GBA will continue trying to recruit participants in the districts, where participation currently includes 68 percent of the total square footage in Downtown and Oakland.