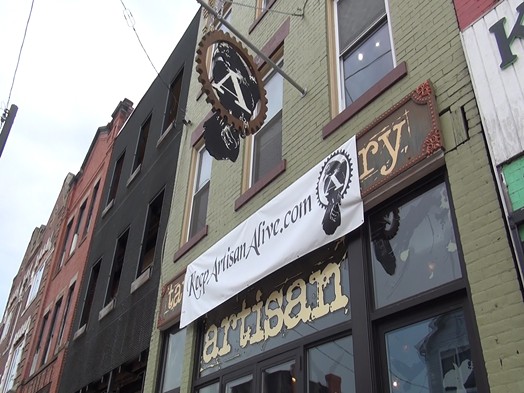 Photo by Ashley Murray
A banner that reads "Keep Artisan Alive" hangs on Artisan Tattoo's facade along Penn Avenue in Garfield.
With less than 24 hours to go on its Indiegogo crowdfunding campaign to pay for renovations, the owners of Artisan Tattoo still need to raise about half of their $87,200 goal.

"The money that we raised made the situation go from impossible to just really hard," says Meliora Angst, co-owner of Artisan.

Meliora and her husband Jason Angst are raising money to keep their business "alive" after being told they'd need to do costly renovations to keep their Garfield business up to code.

Photo by Ashley Murray
Owners Jason and Meliora Angst
The couple purchased the Penn Avenue building in 2012 and say they have since been trying to navigate the city's zoning laws for their vision of a three-story commercial business,  which will eventually include a cafe in addition to the tattoo studio and art galleries. When a new inspector nixed the approvals of an initial inspector, the process became confusing and expensive, the Angsts say — a situation they described for City Paper last month. And now they say, they're required to spend more than $60,000 on building a new three-story fire escape, as well as almost $30,000 on renovating several bathrooms to become compliant with the Americans with Disabilities Act.

Tim McNulty, a spokesperson for the city, told CP last month that Artisan did not contact the city to have its 2014 renovations approved and was operating its business in the building before it was allowed.

"As with everything, the city has to balance business needs with safety," McNulty told CP.

The new inspector gave the couple a six-month temporary occupancy permit, so that the business could stay open during construction.

Angst says the city still has to process some paperwork before their six months officially begins.

"We’ve got half the money, so that’s great," Angst says. "We can figure the rest out on the way."

Angst says after Indiegogo takes its cut of the campaign money (crowdfunding platforms often take a percentage) and they pay for their "perks" promised to donors, they'll have about $30,000, which she says is enough to buy all of the construction materials.

Also, rather than cash, Angst says, some construction companies donated free labor and other organizations donated free space for fundraising events. She says a few more monetary donations could pan out before the deadline tonight.

"We're continuing to build with the money that we raised, while also continuing to work really hard," Angst says. "We have plans A, B, C and D. We're just waiting to see what works out."