Like the rest of the country, Pittsburgh weathered World War II. But it also had an outsize impact on the war. 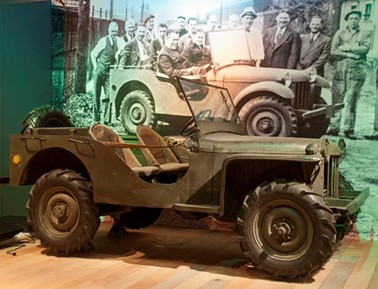 Photo courtesy of Heinz History Center.
The exhibit includes this early jeep, made in Butler.
We Can Do It! WWII is the title (playing off the famous Rosie the Riveter poster) of the new Senator John Heinz History Center exhibit exploring wartime Pittsburgh, during the 1940s. The exhibit is timed to coincide with the 75th anniversary of the war, which began with the Nazi invasion of Poland in September 1939.

“The 10,000-square-foot exhibit will explore Western Pennsylvania’s incredible impact on the home, industrial, and battle fronts during World War II,” according to a History Center press release. “Visitors … will learn about the development of the jeep, a uniquely American invention produced by the American Bantam Car Company in Butler, Pa., and reveal the stories behind ‘Rosie the Riveter’ and the local Tuskegee Airmen whose contributions helped to turn the tide of the war.”

Tags: Heinz History Center , We Can Do It! , World War II , Rosie the Riveter , Image