The title of the Jon Spencer Blues Explosion's latest offering, Freedom Tower - No Wave Dance Party 2015, is a little lengthy. That's because it attempts to sum up a sound with a lot of components. In a way, it speaks to the band's whole career. The Blues Explosion have always lugged the history of Blues and Rock and Roll behind them. But in the nearly 25 years of their existence, they've never indicated any fatigue from pulling that weight.

That first part, "Freedom Tower," makes reference to the skyscraper built at the site of the Twin Towers, post 9/11. This is an album about New York, as experienced by the band, over many years. If the "2015" in the title weren't enough, that "Freedom Tower" should clue listeners that the album is anchored in the here and now. Spencer has no interest in eulogizing. There is a track called "Funeral," but it's the album's opener, as if to indicate there is plenty of life to be lived after the death. The song's uptempo pace begins to make the case, by the time Spencer's first exclamation of "Blues Explosion!" hits, the vitality is undeniable.

Though there can be little doubt that Spencer is committed to his sound; Blues with a healthy infusion of Rock and Roll swagger, that sound is still as at odds with prevailing trends as it was in the early 90's when the Blues Explosion was born. As such, true as it may be to the traditions it follows, it's difficult to take the Blues Explosion purely at face value. It's not contrived, but it is precisely arranged. In that arrangement, there are hints of subtext. Intrinsic to this formula is Spencer's willingness to leave space for his own charismatic personality.

Spencer's willingness to experiment with the component parts doesn't always work. The rippity-rappity style of old school hip-hop rhyming he employs for a great part of the album often feels stilted, stifling the heat built by the tight-as-ever back beat of the Blues Explosion. It is precisely this fearlessness that the "No Wave" portion of the title is meant to address. Cutting his teeth in noise-rock outfits like Pussy Galore, Spencer was reaching for the iconoclastic over the accessible since his first forays into music. As for the "Dance Party" of the title, it requires no explanation. More than anything, the Blues Explosion is an impetus to motion. In the following conversation, Jon Spencer talks about how his inspiration informs his motivation. 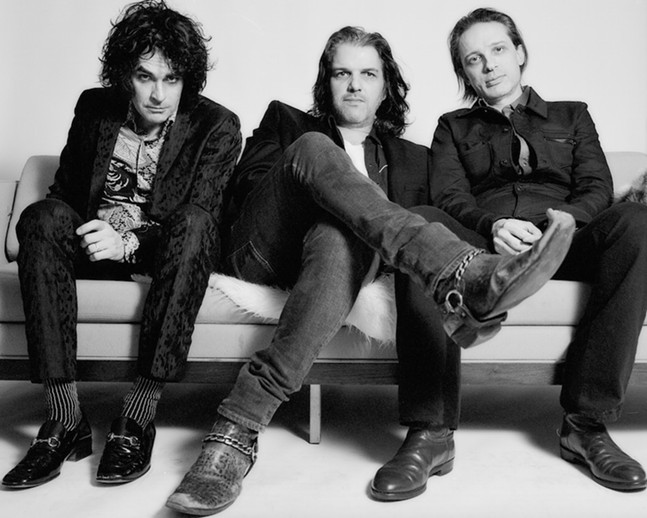 Micha Warren
The Jon Spencer Blues Explosion
You've mentioned in other interviews that you aren't coming from a nostalgic place on this album. Can you elaborate?

I think in my head and in my heart, I still relate to the New York City I fell in love with some thirty years ago and that's a city that no longer exists. I may be wistful at times, but I'm not bitter about it and I don't wish to return to some time that's gone and passed. So, no, this record was not intended to be a nostalgia trip. It's not only about old New York, it's also about New York City today.

Was the purpose, then, to make a juxtaposition between old and new? What brought this stuff to your mind?

Just living and working here for all these years. Blues Explosion has been going for about 24 years and we've definitely been influenced by bands and musicians that have gone before us, people that have lived and worked here in New York City. I think that the city, itself, just living in this big, overwhelming, noisy place has been an influence on us. It wasn't meant to be a concept album. These things just sort of bubble up. When we're writing a song, we try to be very sensitive to inspiration and a lot of the time that's coming from the underneath, from inside, from the subconscious.

I've listened to Jon Spencer Blues Explosion over the years. What I've come to realize, I think, is that it's largely a reaction. I look at it as holding up a mirror to culture.

Perhaps, I don't know. [That] makes it sound like we're only reactive and I think that there's a lot of life and energy in what we do. I don't think we exist just to react to some outside stimuli.

I guess what I mean to say is that the Blues Explosion distills things down to an essence. For example, I read about how you studied the Sun Records artists for their cultural significance and the signifiers in their stage presence.

If you want to talk about Sun artists, what you hit your head against first is the cultural significance. People like Jerry Lee Lewis and Johnny Cash and Elvis Presley; those are huge, almost mythical figures in American culture. What I was more interested in talking about was the actual music, what they did as artists and get into that. That's a much different thing. I think with me and my relationship to rock and roll music and, to a larger extent, the Blues Explosion, we're definitely great fans of rock and roll music and I think we're trying to form very personal connections to this music. With the Sun artists I think that the actual sounds, the recordings, if you could strip away all the signifiers and layers of paint that have been accumulating over the years, I think it's still very powerful music, very powerful art.

Would you say that it's accurate to call what you do in the Blues Explosion fifty percent emulation and fifty percent commentary on - I don't want to call it source material because you're doing your own thing - but blues and rock and roll?

We are a rock and roll band and we are kind of a garage band. We were so in love with these bands and the records that they made that we wanted to start our own band. I think that's the way it's always been. Elvis Presley was in love with certain country and western artists, certain blues artists, and he was in love with people like Dean Martin, popular music artists. It was a jamming together of these different styles.

I think that if there is emulation there, in rock and roll emulation has always been a part of it. I think that rock and roll is a mongrel sort of music and it's no wonder that it changed our society and modern culture in the way that it did because it crosses so many lines. As far as the Blues Explosion, yeah we dig rock and roll and want to play it ourselves. At the root of it, we are like any garage band, emulating our heroes. I think that we wouldn't still be doing it or wouldn't be able to get as far as we have, if that's all there was to it. There's a great deal of originality and style to what we do and that's why people respond to it.

Yes, we live in a post-modern world, but the Blues Explosion is not at all about irony. We aren't doing this because we want to make fun of Little Richard or Elvis Presley or make some comment on these artists or genres. We're doing this because we love this stuff and we want to keep it alive. Yes, there are songs that can and do operate on different levels. A cultivated, sophisticated listener might catch some of these different levels of meaning. Ultimately, we're a rock and roll band, playing a rock and roll show, so we're aiming squarely from the hips.