Photo by Ashley Murray
Rachel Filippini of Group Against Smog and Pollution speaks at the April 14 ACHD hearing on a proposed permit for the Lawrenceville steel foundry facility.
A large crowd poured into a small, stuffy room at the Allegheny County Health Department building last night to testify about a draft permit for the McConway & Torley steel foundry, in Lawrenceville.

"'Made in the U.S.A.' still means a lot. Better yet, 'Made in Allegheny County' means a lot more," said Robert Cephas, a ladle-crane operator at M&T for 13 years, who spoke at the hearing.

"If they have to go to 21,000 tons, they're not going to need 400 employees," said Daryl Lumpkins, a Lawrenceville resident and M&T employee, during his testimony.


A significant amount of pollutants from M&T are considered "fugitive emissions," Jim Thompson, deputy director of the health department, told City Paper last month. That means that the emissions are not directed to one place, like a smoke-stack for example. They might instead "waft out of the building."

Several concerned residents and organizations spoke about levels of the heavy metal manganese that are measured at a monitor located on the fence-line of the facility, which is located on 48th Street. The most recent results can be viewed on the health department's website. 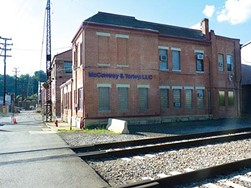 Photo by Lauren Daley
McConway & Torley facility in Lawrenceville
According to the monitor data, the level of manganese emitted by the plant exceeds the U.S. EPA's Integrated Risk Information System (IRIS) by more than 50 percent. The IRIS tool is basically a measurement of the concentrations of a substance that it would take to effect human health; the EPA measures manganese because of its risk of possible neurological effects.

Peri Unligil, a physician of internal medicine with UPMC, expressed concern about the proximity of the foundry to Children's Hospital on Penn Avenue.

"I'm concerned about the long-term health effects on the workers and residents. ... I'm concerned because M&T is located a mile from Children's Hospital, which has some of the most vulnerable [patients]," Unligil said at the hearing.

“Manganese is a neurotoxin. Nobody should have to breathe it every day, especially children whose brains are still developing,” said Rachel Filippini, executive director of GASP, in a press release and at the hearing. “In 2015, you would not build a factory that emits toxic pollution right in the middle of a densely packed community."

The foundry has been in operation since the 1860s. Several supporters who testified cited its legacy and the status of communities where the steel industry collapsed — particularly Homestead and Duquesne — as reasons the facility should remain at current production levels.

The company did not return a phone call for comment.

The health department will now consider all comments and publish responses when a permit is issued.