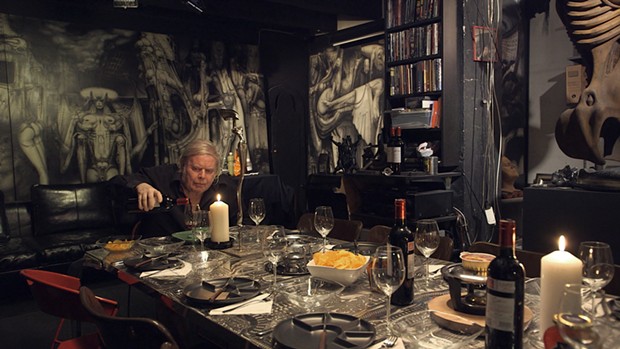 A scene from the upcoming film Dark Star: H.R. Giger's World, distributed by Icarus Films
If that monster in Alien freaked you out, you can thank H.R. Giger. The Swiss artist, who died last year, created it, and other masterpieces of "fantastic realism." He published Necromonicon in 1977, and besides Alien, did film design work for Poltergeist II, Alien 3, Species and the never-made but highly influential Alejandro Jodorowsky adaptation of Dune.

In June, the Hollywood Theater, in Dormont, celebrates Giger, by screening a new documentary, Dark Star: H.R. Giger's World, as well as Alien and Aliens. And the Hollywood is inviting Giger fans to pitch in, by designing a poster for the June screenings. The guidelines are as follows:

GUIDELINES FOR THE POSTER CONTEST

Create an original artwork that you think best exemplifies the design and atmosphere of all three films. The poster should include the titles of all three films, the Hollywood Theater, the dates June 5-11, 2015, and the theater’s web address — www.thehollywooddormont.org. Posters may be designed by a single author or by a team. Designs submitted to the contest must be original artworks previously unpublished. Designs must consist entirely of the authors' own work and must not include any copyrighted material.

Entries will be judged by a panel of three judges from the Pittsburgh design community. The winning design will receive 10 copies of the finished screen-printed poster, as well as 10 passes to the screenings. No more than one entry per participant. There is no entry fee.

Submissions should be emailed to manager@thehollywooddormont.org. Deadline for submissions is Sun., April 26, 2015, by midnight.