Did you miss concert announcements yesterday? Sorry! I was hurrying back from the West Coast, and that airplane wi-fi is pretty much useless, am i right?

Here are just a few of the many fine shows coming to a venue near you (many of which beg the question, "what year is it?":

Corizon Health, the private company contracted to provide healthcare at the Allegheny County Jail, responded this afternoon to a Monday City Paper story that revealed inmates are not getting regular access to HIV medication, according to the ACLU.

"We know many of the allegations made in this article are untrue," reads the statement from Corizon sent to City Paper through Harrisburg public relations specialist David La Torre. "Corizon Health’s top priority is providing quality care to our patients. We take seriously the concerns of patients, their families and the community related to clinical quality, especially when it comes to the treatment of HIV/AIDS."

When asked which specific claims the company believed were inaccurate, La Torre wrote: "We won't have any further comment."

State ACLU legal director Vic Walczak responded to Corizon's claims in writing, "We stand by our statements. [It] would take quite a conspiracy by the many patients who don’t appear to know each other, or [who aren't in] contact to all be complaining about the same problems."

The ACLU claims Corizon has failed to provide critical HIV medication to inmates in "a timely and consistent way." Walczak says they've discovered the jail is not properly testing the prison population for HIV, or conducting regular blood work to monitor levels of the virus. Walczak also contends there are failures to provide inmates with HIV medication upon release and offer "pre-release counseling" on managing the disease.

In its statement, Corizon wrote that it is collaborating with the CDC and "has piloted best-in-class HIV/AIDS rapid-testing that will be rolled out in Corizon facilities." Corizon would not disclose whether Allegheny County was included in that program and also would not reveal what the current HIV testing policy is.

The county health department directed all questions to county spokeswoman Amie Downs, who referred questions to Corizon. "This question, and the one that you asked of the Health Department, are both more appropriate for Corizon which provides medical care for inmates at the Allegheny County Jail," Downs wrote.

When asked through email whether that meant the county was declining to comment, she wrote: "Your questions about medicine availability and best practices are not ones that the County CAN [sic] answer. Those are questions that Corizon must answer."

Corizon Health’s top priority is providing quality care to our patients. We take seriously the concerns of patients, their families and the community related to clinical quality, especially when it comes to the treatment of HIV/AIDS. Dr. Woodrow Myers, CEO of Corizon Health, has been a long-term advocate for the issue, including serving as the Chairman of the Ryan White Foundation and promoting a shift in policy in Indiana as it relates to HIV positive patients.

Furthermore, Corizon Health, in collaboration with the CDC, has piloted best-in-class HIV/AIDS rapid-testing that will be rolled out in Corizon facilities.

While state and federal privacy laws prohibit us from discussing the details of any individual’s care or medical condition, we know many of the allegations made in this article are untrue. Corizon Health has not received any requests for information from the ACLU, nor have we been notified of a lawsuit to date.

As a physician-led company, our goal is to provide quality healthcare to patients who enter incarceration with more illnesses and chronic conditions than the general population. Many times they have not had access to medical care, and we are committed to doing all we can to restore them to health.

Every Wednesday, we make a Spotify playlist containing tracks from artists covered in the current music section. Let Listen Up! be your sonic guide to this week's issue!

Henderson Hill’s talk is titled "Broken Beyond Repair: Pennsylvania Illuminates the Nation's Abandonment of the Death Penalty. It comes in the wake of Gov. Tom Wolf’s recent suspension of capital punishment here.

Hill, based in North Carolina, is a former public defender in Washington, D.C., and former executive director of the Federal Defenders of Western North Carolina. He also founded the Center for Death Penalty Litigation.

Hill's talk is sponsored by groups including Pennsylvanians for Alternatives to the Death Penalty, the National Lawyers’ Guild, the ACLU of Pennsylvania and Amnesty International Pittsburgh Group 39.

Photo by Tom Martinez
Jeanne Theoharis
Often called the “first lady of civil rights,” the popular image of Rosa Parks is that of a quiet seamstress whose refusal to give up her seat on a bus helped end public segregation.

However, Jeanne Theoharis challenges this image of Parks in her new book, The Rebellious Life of Mrs. Rosa Parks, which received a 2014 NAACP Image Award.

Theoharis reveals a woman who had a history of being rebellious, and how this rebellious nature impacted years of unjust social practice. Gwen Ifill of PBS Newshour has praised Theoharis for “giving us a valuable framework for understanding the present and future.”

The New York Times describes Theoharis’ Rosa Parks, “as much Malcolm X as she is Martin Luther King, Jr.”

Theoharis, who is the author of several other books about the civil rights movement and contemporary race politics, will speak at 4:30 p.m. today following a short reception.

The free talk will be given in the Giant Eagle Auditorium, room A51 of Baker Hall at Carnegie Mellon, located at 1098 Morewood Ave., Oakland.

Carlow University presents a free Women’s History Month screening of this recent film about Boggs, a Chinese-American writer, activist and philosopher best known for her work in African-American organizing. 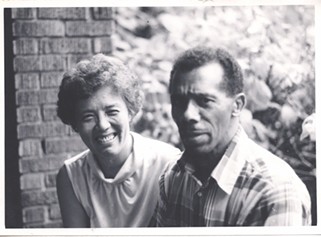 Image courtesy of americanrevolutionaryfilm.com
Grace Lee Boggs and James Boggs
The film’s director, Grace Lee, will attend for a discussion.

Boggs, who is 98, is from Detroit. She teamed with her late husband and fellow activist James Boggs, an auto worker, to address social issues, and has spent decades marching and organizing for justice. The film's trailer finds Boggs being feted by the likes of Angela Davis and interviewed by Bill Moyers.

Filmmaker Lee, based in Los Angeles, is known for her work on PBS and for Janeane from Des Moines, a feature-length doc about the 2012 presidential campaign.

The free screening of American Revolutionary: The Evolution of Grace Lee Boggs takes place at 4:30 p.m. in room 107 of the A.J. Palumbo Hall of Science and Technology, on the corner of Fifth and Craft avenues, in Oakland.

The event is sponsored by Carlow’s Women’s and Gender Studies, and English departments, and by the Madwomen in the Attic Creative Writing Workshop.

Photo courtesy of Brandon Perdomo
This week's MP3 Monday ("on a Tuesday") comes from local bluegrass outfit The Jakob's Ferry Stragglers. On the heels of its latest LP, Lane Change, Gary Antol's project plays Thunderbird Cafe this Friday, March 27. Take a listen to "Scattered Pieces" below.


To download, right-click here and choose "save link as."

The ACLU is investigating the Allegheny County Jail for failing to provide HIV medications to inmates in "a timely and consistent way."

"We have been investigating this for the last three months,” says state ACLU legal director Vic Walczak. "What we’re hearing is that pretty much every prisoner with HIV/AIDS has encountered these problems."

The problems, says Walczak, include failures to: provide HIV medications consistently; conduct HIV testing among prisoners; do regular blood work to check the viral loads of those who are already infected; provide a certain amount of medication upon release; and provide "pre-release counseling" on managing the disease.

“It’s a potential public safety disaster – and it’s not just inside the jail. They’re going to get released into the community,” Walczak says, adding that missing doses can have "life-threatening" consequences for inmates and others who may contract the virus.

Walczak and others have met with the county, but Walczak would not comment on what remedies, if any, the county would agree to. If the situation doesn't change, he warns, “the ACLU will do what the ACLU often does.”

Amie Downs, the county's director of communications, did not immediately respond to a request for comment.

The county contracts for about $11.5 million per year with Corizon Health, a Tennessee-based company, to provide health care for the jail. Corizon has been regularly criticized for failing to provide medically necessary medications to patients. An inmate died earlier this year; his lawyer said the jail did not provide medication for his epilepsy.

The ACLU's claim about inconsistent HIV/AIDS care  "certainly doesn't surprise me," says Allegheny Controller Chelsa Wagner, who conducted an audit that concluded in part that the company was not providing basic clinical services. Wagner says she was unaware of the HIV medication issue, but “It’s very clear to me that their failure to comply with the contract and to meet inmate health needs is because of their for-profit motive, which is completely at odds with what is needed in the jail or any sort of public setting.”

Calls to Warden Orlando Harper and Corizon were not immediately returned.

The average population of the jail typically fluctuates between 2,900 and 3,100 people, according to a 2014 report, though Walczak estimates there are probably less than 30 people who know they are HIV positive in the jail.

“I think the problems afflicting the HIV community in the jail are similar to the other patients. The reason we chose to focus on HIV is the treatment protocols are clear and the dangers from a failure to follow them are substantial, even life-threatening.”


Editor's note: This post has been clarified to reflect that Amie Downs' official title is director of communications for the county, not spokesperson for County Executive Rich Fitzgerald.

You might not associate Rivers of Steel with sustainable gardening. But the historic-preservation nonprofit is teaming with The Pittsburgh Garden Experiment (a forum about urban food production) to host just such an event.

The urban-farming and local-economy expo runs from 10 a.m.-4 p.m. at Rivers of Steel’s Historic Pumphouse, in Homestead. The program includes both networking opportunities and a series of 10 TED-style presentations by green entrepreneurs, organizations and backyard experimenters.

A full schedule is here.

The Pump House is located at 880 Waterfront Ave.

Trailer for Sale or Rent

Trailer for Sale or Rent: The Gunman

Film: The Gunman
Opening Date: Fri., March 20
Stars: Sean Penn, Javier Bardem, Ray Winstone, Mark Rylance and Idris Elba (British version)
Necessary Info: “From the director of Taken”; a good guy who acted like a bad guy now has to act super-bad to take out the bad guys trying to kill him, a.k.a. the Noble Assassin’s Sad Tale


Sample dialogue: Penn, pointing a gun: “Then we got nothing left to talk about.”

Trailer Analysis: Not helpful for plot — seems like Penn is an assassin who now has to be killed to cover up something, so he gets to work killing first. Javier Bardem plays a smirky bad guy, and is sporting his first normal hairdo in years. Penn is all beefed up, but his face looks like he washes with sandpaper; no wonder the trailer has two scenes of him looking mournfully in mirrors. Only woman featured is shown: dressing, in bed, kidnapped. Lots of whispery threats. Mostly standard selection of weapons: huge gun, small gun, fist, machete, knife, grenade, bull (maybe).

Based on these 2:17 minutes, should you go? If you regret missing Taken 3 earlier this year