Pittsburgh Bike Share will (finally!) start in May | Blogh 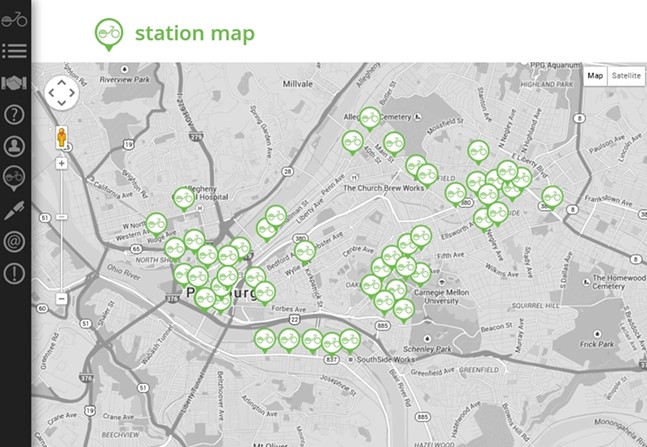 “Things are marching forward,” says David White, executive director of Pittsburgh Bike Share, the nonprofit that manages the program. “We hope to have users with the ability to take out a bike starting in May.”

The program was initially announced in 2013, when then-Mayor Luke Ravenstahl told the Post-Gazette, "To have that cool, young, vibrant, hip city that young investors want requires projects like this."

The program has been beset by delays, something Bike Pittsburgh Executive Director Scott Bricker chalks up to a bidding process that took longer than expected and the overall complexity of the project.

“To be fair, I really don’t think that a single bike share program has launched exactly when people intended it to," Bricker says. "It’s a very complicated program to get off the ground. It’s essentially starting a whole new public transportation system.”

Bike sharing works essentially as a rental system that doesn't force you to return your bike to the spot you rented it. Pittsburgh will start out with 50 docking stations across the city, and there are already plans to expand the system in its first two years of operation.

The pricing hasn't been finalized yet, says White, but "we have a sincere vision of creating a system that does not require a fee to register." Bike sharing programs have often struggled to attract lower-income users, but White says, “The goal is to make the system competitive with other methods of transportation ... affordable to all users across all demographic groups."

Payment can be made online, via a smartphone app or at the docking stations themselves; there will also be a membership option for more regular users.

The bikes themselves are manufactured by a German company called nextbike, and will be outfitted with a gear system designed to "help flatten some of the hills for people," Bricker says.

“It’s just going to get a lot more people riding bikes,” he adds. "I really hope it gets more people engaged in the conversation about our streets, how they’re designed and who they’re for.”

"At Once There Was a House" at the New Hazlett Theater