"At Once There Was a House" at the New Hazlett Theater

Beth Corning finds something both very adaptable and very compelling about her concept for At Once There Was a House. 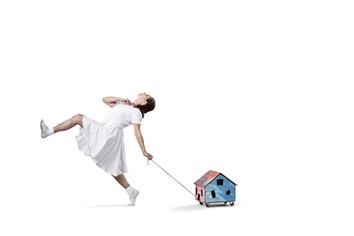 Photo courtesy of Frank Walsh
Beth Corning in a promotional still for "At Once There Was a House"
The veteran performer and choreographer has revived and revamped the show multiple times since its first showing, in 2005. The last time was a few years ago, with Pittsburgh’s Dance Alloy Theatre. But the current production, which runs through Sunday, has a new cast and evening-length scope, and is to a large extent a new show.

The clever premise remains: It’s “whatever happened to Dick and Jane,” the treacly juvenile protagonists of the old grade-school readers. Corning and the five guest performers of her Corningworks’ Glue Factory Project (for performers over age 40) frame the show as a high school reunion where the graduates are still preening, still vying for attention, but still unfulfilled.

The overall effect is both comic and dark, and cast is used to fine effect. Highlights of the 70-minute show include: Kaddar and Tolentino’s emotionally charged duet (set to a passage from Don DeLillo’s The Body Artist); Gresh’s funny interpretation of Larry Siegel’s The Dick & Jane Hamlet; and a piece choreographed to Dempsey’s rendition of a rock classic on accordion. The evening is bookended by pieces set to Tom Waits’ “Table Top Joe.”

Four performances remain of At Once There Was a House, from tonight’s at 8 p.m. through this Sunday’s matinee. Tickets are $25-30, although admission to Friday night’s Corningworks 5th-birthday bash are $50, and Sunday’s show has a pay-what-you-will option at the door.

The New Hazlett is located at 6 Allegheny Square East, on the North Side.