One of Pittsburgh's greatest art treasures is explored and celebrated in Behind the Murals: History and Other Stories. The exhibit looks at the Millvale murals of Maxo Vanka, who famously expressed the plight of working people in war and industry on the walls of Millvale's St. Nicholas Croatian Catholic Church. 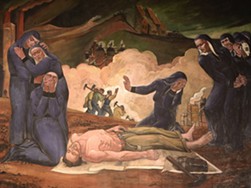 Photography by Rob Long/Clear Story Creative.
One of Vanka's Millvale murals, depicting women mourning a dead miner.
The exhibit, organized by The Society to Preserve the Millvale Murals of Maxo Vanka, opens with a reception tomorrow at Millvale's Panza Gallery.

According to a press release, "The exhibit explores the historic, social and artistic influences impacting each stage of the creation" of the murals, which Vanka worked on in 1937 and 1941. Vanka was a Croatian immigrant whose powerful images indicted war and greed.

Over the years, the murals, though indoors, had been degraded by time and moisture. Since 2009, the Society has raised nearly $500,000 to restore and relight the 22 murals. So far, 10 restorations have been completed.

The exhibit continues through March 27, but its run also includes other events, including the Society's annual fundraiser. Held March 6 at St. Nicholas, the fundraiser will be hosted by actor and Pittsburgh native David Conrad and include food, drinks, performances and conversation. More information on the fundraiser is here.

Panza Gallery is located at 115 Sedgwick St., in Millvale. Saturday's reception is free.