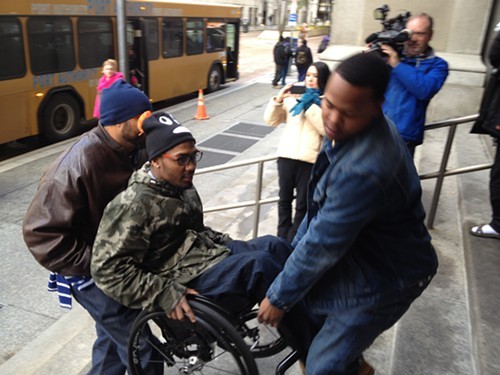 Allegheny County District Attorney Stephen Zappala announced Friday afternoon that he is withdrawing all remaining charges against Leon Ford, a motorist who was paralyzed when he was shot by a City of Pittsburgh Police officer following a traffic stop in November 2012.

Ford was acquitted of aggravated assault charges in September but still faced charges of reckless endangerment, escape and resisting arrest. The charges have been hanging over Ford, while a civil lawsuit he brought against the officers as well as a Federal investigation into the officers conduct continues. The officer, Dave Derbish, was placed on desk duty last month by Pittsburgh Police Chief Cam McLay following community protests.

Ford told City Paper’s Alex Zimmerman moments ago: “I just got this news like 3 seconds ago - I’m just extremely happy, I’m smiling from ear to ear." Ford is currently in the hospital recovering from a surgery related to the injuries he suffered from the shooting.

However, Ford's father, Leon Ford Sr., who was informed of the decision by a CP reporter, says the dropped charges aren't cause for celebration.

"It doesn't make no difference," Ford Sr. says. "We’re still dealing with the reality that my son will never walk again for no reason.

"Why would I be happy when they drop some charges? I’m happy my son survived this ordeal."

Ford was stopped for a traffic violation in November 2012 and was detained for an extended period of time. On a video recording, officers can be heard saying that they believed Ford was someone else and that he was lying about his identity. Officers were wrong about that and at one point during the stop, when Ford attempted to drive away, the officer got into the car and seconds later opened fire.

Zappala cited five factors in withdrawing the charges, and they are listed in their entirety below. One of those factors, however, seems to be that because Ford is paralyzed he will be deterred from similar behavior in the future.

“The deterrence of any future conduct of this type, – fleeing a lawful traffic stop – will be as a result of the injuries sustained during the event, and not from a second trial,” the statement reads.

Brandi Fisher, president of the Alliance Police Accountability said she was "ecstatic" when CP informed her of the decision.

"He didn't deserve to be charged in the first place it was always our position that he committed no crime,” Fisher says.

However, Fisher took issue with some of the language the DA's office used to justify dropping the charges. According to a press release, "The deterrence of any future conduct of this type, – fleeing a lawful traffic stop – result of the injuries sustained during the event, and not from a second trial."

Fisher says that language wrongfully blames Ford for the traffic stop that left him paralyzed. "I see a huge problem with that," Fisher says. "There’s always a consistent theme of blaming the victim."

Fisher added that deterrence shouldn't come in the form of a paralyzed teen, but in meaningful accountability within the department.

The other factors, according to the D.A.'s statement are:

1. In terms of the protection of the public, a jury acquitted on the assault allegations against the persons immediately at risk - the police officers. Those issues cannot be re-tried.

2. That the trial judge found the traffic stop was legal – i.e.,that the police were properly enforcing the law. This was the matter appealed by Ford, which took jurisdiction away from the trial court.

3. The deterrence of any future conduct of this type, – fleeing a lawful traffic stop – will be as a result of the injuries sustained during the event, and not from a second trial.

4. That members of our community who have raised issues concerning police training and tactics will have a fair and thorough analysis of those issues by the United States Justice Department.

5. That given the efforts of Chief McLay to improve police and community relations, it is my hope that not proceeding to a second trial will assist both the Chief and our community in this regard.

We'll have more on this story as it becomes available.

Trailer for Sale or Rent: The Boy Next Door