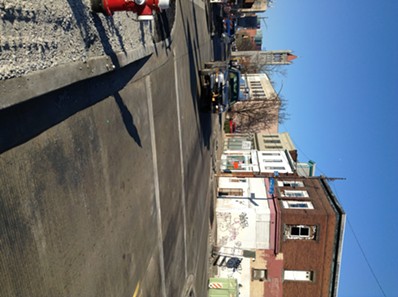 As the ball drops and midnight kisses ring in the New Year, residents in Garfield may be celebrating for a different reason — the re-opening of the neighborhood's main artery, Penn Avenue, to two-way traffic.

"We're glad that the roadway is going to open, and we're blasting it [the news] everywhere because people are bypassing the entire avenue, not just where the construction was," says Aggie Brose, Deputy Director of the Bloomfield-Garfield Corporation, a non-profit that advocated for the reconstruction.

This week, Mayor Peduto's office announced that the street construction between Mathilda and Evaline streets is complete and that Penn would re-open in the wee hours of New Year's Eve day. Improvements to sidewalk, street lights and traffic signals will continue until the summer, which may impact street parking, a press release from the mayor's office says. The project, which has been ongoing since August 2013, ran into several obstacles causing delays that wreaked havoc on local business and drivers alike.

"People who don't know what's on this side of the door [of his storefront], it was kind of daunting for them to come by with one-way traffic, no parking and an eight-foot fence in front," says Jerry Kraynick, owner of Kraynick's Bike Shop on Penn Avenue.
click to enlarge

Crews ran into rusted, paved-over trolley tracks, which contaminated the soil, and hit into water lines, including a main one running to Children's Hospital that could not be shut down, according to Brose.

"It was a very well-planned out project, but the street didn't have any maintenance for decades," and crews didn't even know what they were going to run into underground, Brose says.

Brose compared the project to the re-vamped Brookline Boulevard in the South Hills. Once completed, Penn Avenue is slated to have benches, new lighting, new trash and recycling recepticles, and businesses will have the option to either get rid of or get new sidewalk vaults — the double doors that lead to basement steps from the street level.

"It's dragged on long enough to have people very upset," Brose says. Even with the "financial harm" done to businesses, she hopes that people will remember what the avenue used to look like.

"There were gigantic potholes, old trolley poles all rusty and brown.  The sidewalks were deplorable; curbs were swallowed up," she says. "We have parking meters, and I lose track of time, but some 15 years ago, someone came and sawed off all the tops for money. Just the poles were left."

Phase two between Evaline and Graham streets will begin in 2017. Brose says this section of Penn received much more maintenance and investment over the years and should be a quicker fix.

"This has been a long journey and will have great results at the end once everything is finished," Brose says.

Trailer for Sale or Rent: Woman in Black 2