Protesters gathered in East Liberty to demand that any remaining charges against Leon Ford - who was shot by a Pittsburgh police officer during a traffic stop in 2012 - be dropped and that the officer who fired the shots - Zone 5 Officer David Derbish - be put on desk duty.

Ford, who is now paralyzed, attended the rally.  A jury found him not guilty of aggravated assault in September, but the jury hung on other charges, including resisting arrest.

"We are gathered here today to demand justice for Leon Ford, Jr.," Julia Johnson, protest organizer, said to the gathering crowd. "Officer Derbish, the man who jumped into his car and shot Leon, is still a police officer today carrying a badge and a gun. The powers that be, our mayor, our district attorney, our police chief have the power to prosecute police officers who break their own rules, break our laws with racist malice in their hearts." 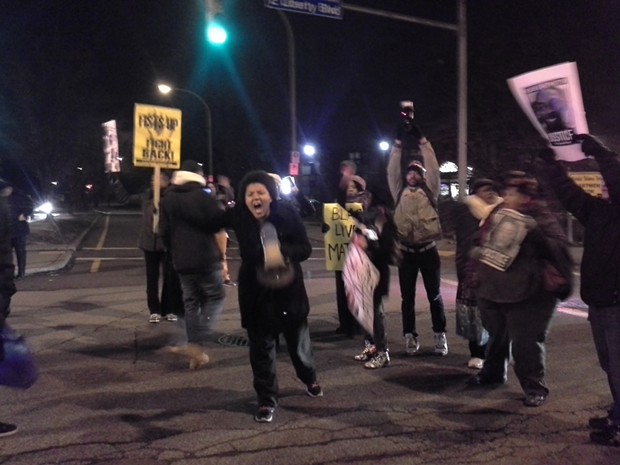 Photo by Ashley Murray
Julia Johnson, protest organizer, directing the crowd to shut down the intersection of East Liberty and Negley Run boulevards.
During constant changing refrains of "Zone 5, Shut it down" and "No justice, no peace, take Derbish off the streets," among other chants, the crowd marched from Penn and Highland avenues to Zone 5 Police Headquarters on Washington Boulevard via East Liberty and Negley Run boulevards.

Police at the headquarters had prepared the parking lot with caution tape, separating them from the crowd, and stood at attention while protesters gave testimonials about their experiences with police and, at one point, sang the national anthem to the officers.


PA Rep. Ed Gainey was among the speakers during the time outside of the headquarters.

Cars honked along Washington Boulevard as the crowd stopped traffic once again to make its way back to the East Liberty business district. On their way to shut down and LAY in the intersection of Penn and Centre avenues in front of Target, the crowd yelled, "Indict, convict, put these killer cops in jail. The whole damn system is guilty as hell."

"The protests have been going on around the country.  We're here in solidarity in Pittsburgh with Eric Garner and Mike Brown and everyone else," said Brandi Fisher, protest organizer and president of the Alliance for Police Accountability. "But we have our own injustices here in our city, and we wanted to make sure that our city is focused on the people here who have been served a great injustice.  Right now Leon Ford, even though people believe that he was found not guilty, he still has charges that can be brought back on him, and we're here sending a message to our DA that we would like those charges dismissed."