720 Music, Clothing and Cafe to close in January | Blogh

720 Music, Clothing and Cafe to close in January 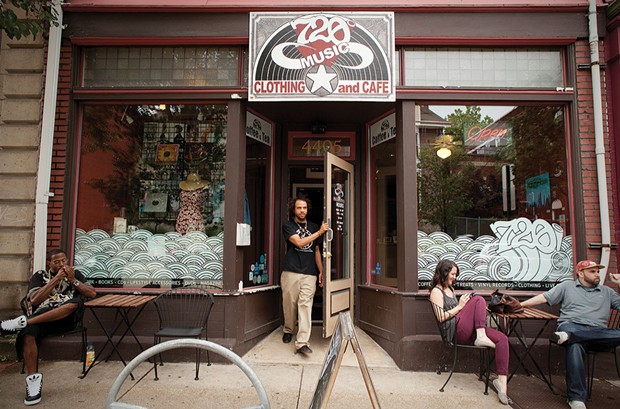 720 began as 720 Records in Oakland and had locations in East Liberty and Squirrel Hill before moving to Lawrenceville in early 2011. James Scoglietti, also known as DJ Selecta, is the only current owner who was part of the original ownership group when the store first opened in 1999. Current co-owners include Nate Mitchell, Jovon Mitchell and Andrew Burger.

Nate Mitchell, who has owned Natural Choice Barber Shop & Salon in Oakland for 17 years, says he's currently working on his teaching certification as a master barber. "I'll be doing some expansion at the barber shop, looking at the opportunity to open a second shop, and possibly a barber school," he says. He and Jovon Mitchell, his wife, became partners in 720 four years ago, when the Lawrenceville shop opened. Jovon largely runs the vintage side of the store, which sells clothing, books and merchandise. She plans to continue to sell online under the 720 Instant Vintage brand while also attending graduate school.

Scoglietti is focusing on his DJ career; he started the Friday-evening show Grand Groove Radio on WYEP FM earlier this year, and DJs live on a regular basis. "He's my mentor as a DJ," says Mitchell. "He's been DJing for 25 years; this was the perfect time for him to move on, enhance his DJ career."

Mitchell said that Burger, who's been with the store since its early days and came on as an owner around the time it moved to Lawrenceville, isn't prepared to discuss his plans for after the store.

Mitchell thanked Lawrenceville in a statement and told City Paper that the closing has more to do with the opportunities the owners had elsewhere, and a lack of time to focus on the store, than business or costs. He says the store was on a month-to-month lease recently to account for the possibility of closing. "To be totally honest, online sales have been pretty good of late," he says.

"We have a good relationship with our landlord" in Lawrenceville, Mitchell adds. "He even offered to keep rent the same for a while to keep us in the place."

720 will keep its current hours until the end of the year; in January it will scale back its hours slightly, and plans are being made for a closing party Thu., Jan. 22.