Tennessee Williams’ 1947 masterpiece is, most famously, about the relationship between emotionally unbalanced Blanche DuBois, her earthy sister, Stella, and Stella’s husband, the shrewd if loutish Stanley Kowalski. But as this strong production — which has just four more performances through Saturday — makes clear, it’s also about how America was rapidly changing in those post-war years. 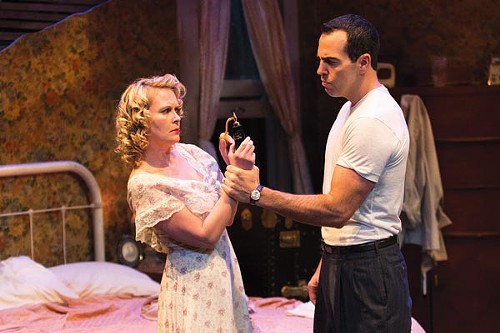 In a preview interview, the show’s director, Melissa Martin, and barebones artistic director Patrick Jordan (who plays Stanley) emphasized how the play addresses the remaking of American identity. It’s especially evident in the conflict between the would-be patrician Blanche (with her old-Louisiana French roots) and first-generation Polish-American Stanley.

But Streetcar’s even bigger than that, I think. What it’s exploring is the passage (or perhaps just the final trashing) of a particular way the whole country, particularly the white American South, looked at itself.

Blanche defends her romantic view of life, which hews to genteel traditions and embraces illusion and masquerade (a practical matter for her, too, as we learn). Stanley, for all his animal energy, is by contrast a man of utter pragmatism: He wants the facts, and when he wants to prove a point, he cites such authoritative sources as the Napoleonic code and, later, various informants who give him the lowdown on Blanche — whose own authorities, when she quotes them, tend to be poets.

Indeed, Stanley and his poker pals might be said to represent the incursion of Northern ways into the South — not just because of their ethnicity, but because they work “at the plant” — in industry, not in some such gentlemanly profession as disgraced schoolteacher Blanche might prefer.

Those themes are just one reason this is a classic play you can really get lost in. Another is Tony Ferrieri’s French Quarter flat set, detailed down to the period stove (and in such remarkable contrast to the a-chair-and-a-hat sets in so many contemporary plays).

The show runs at 8 p.m. nightly tomorrow through Sat., Dec. 6, at the New Hazlett Theater. Tickets are $30 and are available here.