NLRB rules in favor of, reinstates workers at UPMC | Blogh

NLRB rules in favor of, reinstates workers at UPMC 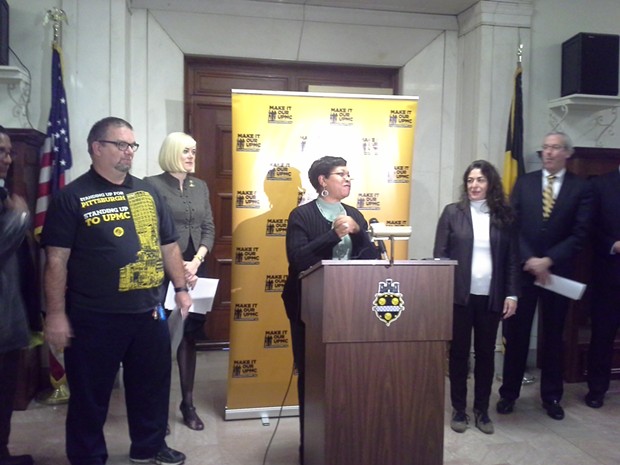 Photo by Ashley Murray
Leslie Poston spoke at a press conference following the NLRB decision that reinstated her co-workers and ordered back-pay for her 11-day suspension.
Workers who were the focus of the

against UPMC celebrated today at the City-County Building at a press conference held by Pittsburgh City Councilor Natalia Rudiak. Nearly 50 supporters from groups including, the Service Employees International Union, Action United and Working America, cheered as the employees spoke and as local and state officials thanked the workers for “investing in Pittsburgh” by standing up to UPMC.

orders that formerly fired and suspended workers Ronald Oakes, Al Turner, Jim Staus and Leslie Poston are to be reinstated with back pay including interest and relief from tax burdens that come with receiving large sums of money. The full decision,

PDF — which can be read here

“This is a milestone. For me, being fired twice and turning [the settlement] down, it proves we did nothing wrong,” Oakes says.

Oakes was reinstated after the first NLRB complaint against UPMC for illegally survielling and interrogating workers who were trying to unionize.

Oakes and the three others turned down UPMC’s offer to settle this current case outside of court.

“The judge told us something on Friday that we already knew,” Poston said in her speech. She says she is going to enjoy the “freedom” of continuing to talk to her co-workers about forming a union.

UPMC’s Chief Communications Officer Paul Wood said that UPMC is disappointed and disagrees with the NLRB’s findings but was not surprised by them. He attributed a U.S. District Judge Arthur J. Schwab as saying that the NLRB has become “the litigation arm of the union.”

“We believe the record fully supported our actions with regard to under-performing employees and failed SEIU organizing efforts in which our employees have shown little to no interest,” he said in an email exchange with the City Paper.

UPMC plans to appeal and is exploring other legal options.